Future Champions Golf would like to thank the record number of College Coaches that were in attendance for our 10th Annual FCG National Championship. 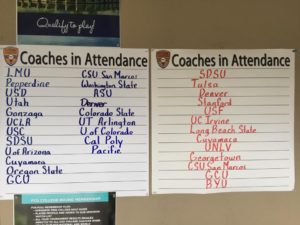 Future Champions Golf ended the 2016 year with a two week golf event that has become the one of the most prestigious junior golf tournaments in the nation. The 10th Annual FCG National Championship saw its second week of action spread out between 4 different golf courses. Sycuan Golf Resort was the main host for our closing event and Steele Canyon provided a perfect compliment for our Boys 15-18 year 3 day championship. Let’s see how the year ended off for some of our players. 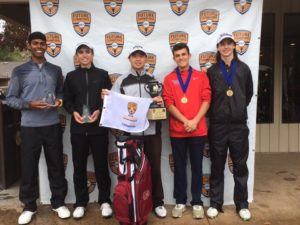 In the boys 15-18 year old division had 180 players sign up to try to win of the biggest events in all of junior golf. Players from all over the world and the country gathered at Steele Canyon and Sycuan Golf Resort to try and determine our National Champion. The first day saw some big fireworks over at Steele Canyon and Zihao Jin shot an incredible 65 a new record low for this tournament and gave him a three shot lead going into round 2. On day 2 Cameron Sisk made an incredible move shooting a solid 68 at Steele Canyon in order to pull within two of the lead held by Zihao Jin after shooting a roller coaster round of 72 at Sycuan. Day three started off with some rain and mother nature decided to cut the fun short for the week leaving us with a two day tournament. Zihao Jin became only the 4th person to enter the FCG Hall of Fame by winning his fourth FCG World Series Event with a two day total of (-6) 137 total. Cameron Sisk ended up in second place after shooting rounds of 71 and 68 (-4) for the tournament. Ashwin Arasu of El Cajon, CA shot two rounds of 70 in order to end up with a 140 total and one shot back of Cameron. Shane Muldowney of Carlsbad, CA shot rounds of 69 and 72 in order to end up with 4th place for the event.  Fifth place was a tie between Bo Jin of Encinitas, CA Jared Berlin of Los Angeles, CA and James Song of Rancho Sante Fe, CA. 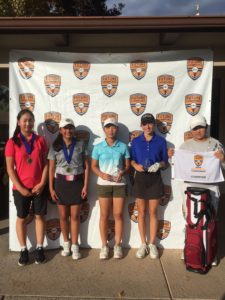 In the girls 13-14 year old category we had 33 girls sign up to try to become FCG National Champion. Oak Glen provided the perfect backdrop for this two day event that has become a staple in any junior golfers calendar. Mina Yoon of San Diego, CA shot an opening round 71 and followed it up with a smoking hot 66 that included 7 birdies and just one bogey beating the field by seven strokes and taking home the honor of calling herself National Champion. Lauren Gomez and Vanessa Ho both shot scores of 71 and 73 in order to come in with a tie for second place at (E) for the tournament. Aishvarya Bedi of San Jose, CA tried her very best to claw back to the leaders shooting a final round 71 but ended up just two strokes shy of second and went home happy with a solid third place finish. Chaewon Baek of Langley, British Columbia ended her year with a solid fifth place finish with rounds of 75 and 72 for a two day total of 146 (+3) for the event. 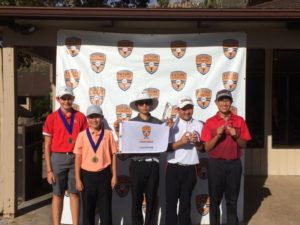 In the boys 11-12 year old category played over at Oak Glen and with more than 40 players in the field competition was at an all time high. After day one You Seong Choi of Hacienda Heights, CA held the lead after shooting an opening round 69 a round that included six birdies and an opening nine 33. On day 2 Kevin An of Riverside, CA came storming back with a final round 69 after shooting 70 on the first day and took home the honor of calling himself National Champion. You Seong Choi settled for second place after shooting a final round 73. Hogan Park of Walnut, CA shot rounds of 70 and 73 in order to place himself in third. Kyle An of Aliso Viejo, CA shot rounds of 73 and 72 in order to take home a very solid fourth place finish. Connor Williams of Escondido, CA took home fifth place after shooting rounds of 71 and 75. 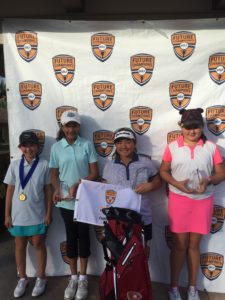 The girls 11-12 year old category played at Oak Glen as well and had 15 girls try to take home the honor of being called National Champion. Karen Tsuru of Carlsbad, CA shot a tremendous opening round 71 and followed it up with an 82 to squeak by the competition and win the National Championship by two strokes. Sophie Zhang-Murphy of Beijing, China tried her very best on day two shooting a 76 but an opening round 79 gave her too much work to do and settled for second place. Jiya Dalal of San Diego, CA had rounds of 76 and 80 in order to place herself in third place for the Championship. Leigh Chien and Lucy Yuan shared fourth place honors after a two day total of 159 strokes. 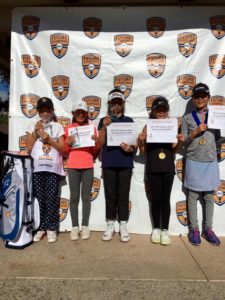 The girls 9-10 year old category had 12 girls sign up for this prestigious event and Pine Glen golf course provided the perfect backdrop for these young golfers to try to become National Champion. Kayla Geng of San Diego, CA and Michelle An of Riverside, CA both shot rounds of 59 and 62 on different days and went to a playoff to determine the winner. Kayla Geng came out on top while Michelle An settled for second place. Vanessa Zhang of Vancouver, British Columbia made the trip down here and took home third place for the prestigious event. Sarah Zhao and Kylee Choi both ended the tournament with a two day total of 129 which was good enough to take home a tied fourth finish. 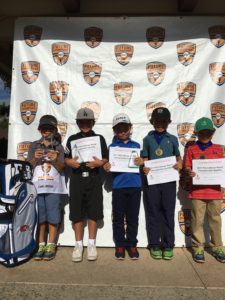 The boys 7-8 year old category played over at Pine Glen golf course and Noah Fry decided that he wanted to become National Champion after shooting rounds of 58 and 61. Keita Yobiko of Arcadia, CA wound up in a tie for second place with Connor Herrera with a two day total of 125 (+17) for the tournament. Evan Liu of La Jolla, CA ended up with fourth place after shooting rounds of 65 and 63. Michael Jorski of Overland Park, KS traveled far and wide and wound up with solid fifth place finish. 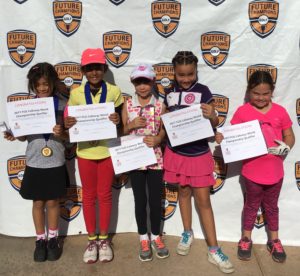 The girls 7-8 year old category played at Pine Glen for the event and was so fun to watch. Zoe Salinas took home the honor of calling herself a National Champion with rounds of 71 and 71 in order to beat the field by five strokes. Emma Molina wound up with second place for the event beating out Liliana Ola Davis who wound up with third. Karina Jadhav took home fourth place just barely missing out on a tie for third by one stroke and Janette Dunn took home a very nice fifth place finish. 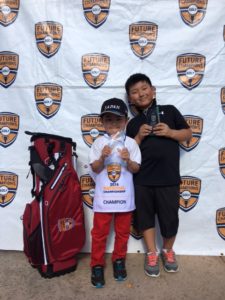 The boys 6 and under category saw two boys battle it out for the chance to call themselves National Champion. Ryuta Yobiko of Arcadia, CA beat out Johnson Huang for the title and everybody had a blast.

Future Champions Golf is determined to become one of the Nations top junior golf tours providing junior golfers elite fields and golf courses with professional style scoring and course setup. It goes without saying that we appreciate and value everybody’s support for these events from parents, volunteers, rules officials and staff members. We will continue to strive to improve upon our standards competition and will strive only for excellence in the future. It is our pleasure to see the growth of junior golf within our San Diego community and hope to continue to expand our reach locally, nationally and globally.