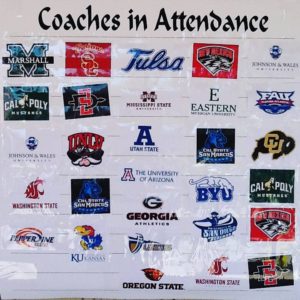 What started as a just a simple idea to help more kids play tournament golf has quickly developed into one of the world’s most elite and competitive junior golf training platforms.  Started in 2004 as an instruction only program at Stadium Golf Center, Future Champions Golf launched a junior golf tour in 2007 to first create more opportunities for kids locally in San Diego to play more 2-Day Nationally Ranked Events.  After a successful first year FCG launched the San Diego Junior Amateur Championship (Now known as the FCG National Championship) to be held over Winter Break in San Diego. The event attracted 220 players from around the western USA and one of the best players in the country Chris Williams from Washington who committed to University of Washington after this event.  The Tour quickly added more events like this one including the FCG International Junior Golf Championship, the FCG Callaway World Championship, FCG Las Vegas Championship, and over 100 more small to large junior golf tournament opportunities.  “We work tirelessly for the kids in our program to have a place to play, an opportunity to succeed, and a fun and safe environment.  The courses on our schedule are strategically picked for development including several college tournament venues, PGA and LPGA Tour courses, and tough tests that help expose your weaknesses so you know how to get better.  Says Antrone Williams, Director of Operations for FCG. 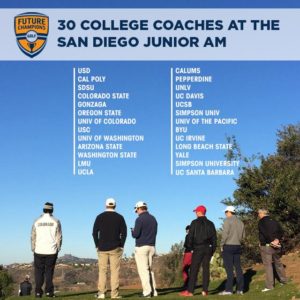 “At this point I feel we have cemented a proven system for players to get exposed to college coaches nationwide and with little to no barrier to entry.  Not everyone can afford the other systems in place, nor can players afford to play tournaments year-round even.  We provide several massive events now that you can just sign up and play and get on the coaches’ radar.  We are very proud and excited to offer this to the kids and the parents of players around the world”.  Says Chris Smeal, Founder of Future Champions Golf.  We just want to give more kids a chance to realize their potential and have a place to play.  It is rewarding to see so many past players succeeding both in the college and professional ranks.  Notables include former FCG National Championship winner Aaron Wise who just secured his PGA Tour card with his Web.com Tour Win.  Ariya Jutanugarn has become the #1 Player in the World on the LPGA Tour and was Champion of the 2009 FCG International Junior Golf Championship.  Players like Beau Hossler, Sean Crocker, Nahum Mendoza, Ryan Ruffels, Todd Baek, and Chris Williams are making their way through the professional ranks.  We have several past champions who have earned All-American honors and two former FCG Champions have become #1 ranked amateur in the world. 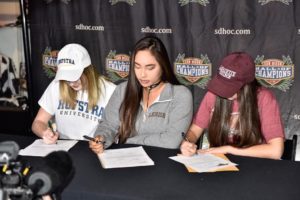 More ways we help you get to College: