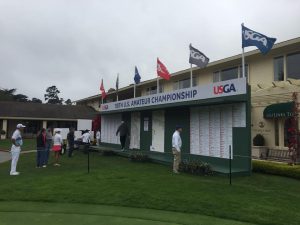 US Amateur at Pebble Beach

To help the most people I will go into great detail about the experience this year in a n effort to help people understand some of the things that go into playing this game.

I arrived Sunday AM to help him warm up and get a good practice round in at Pebble Beach. I was lucky to play in the California Amateur Championship at Pebble Beach and Spyglass in 1997 and remembered the course well.  Last year I also spent a few days here with another student playing these courses so I felt I had a good grasp of what we needed to do to play well this week. The courses are right in front of you and if you strike the ball well you have plenty of opportunities to score.

On the Putting Green on Sunday before the practice round
Watch him throw down a few balls to warm up and was initially surprised to see the ball cutting off the face pretty badly right away. Noticed this from 30 feet away.  Took a closer look and made some adjustments right away to his ball position and how he was releasing the putter. Immediately the ball started to roll better but we needed to work on him seeing the ball start on a slightly different line cause he was use to the way the ball was spinning right off the face even though he didn’t know it.  Luckily he is one of the best “Adjusters” I have ever seen and he understood it right away and I felt good about his chances of at least rolling the ball well this week. 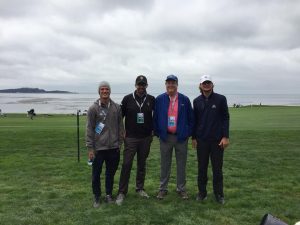 Practice Round – Sunday
Starting on hole 1 at Pebble he striped a 3 iron right down the middle about 240 yards leaving just a PW to the back flag. This green is pretty small and very narrow, the ball was below his feet a little and he executed a terrible swing basically slicing the ball into the right bunker.  I hadn’t seen him since early summer but my initial thought was we have some work to do and we have to do it now. I decided to just keep watching before saying anything. On hole 2 drive one went left into the left fairway bunker then he hit another one with his cut down the right center.  My goal in practice rounds is to SEE good shots so we always play from the best spots to get prepped for how we hope to play while also trying some of the bad locations. Practice rounds are meant to build confidence and we never keep score during them. So his 2nd shot from the fairway from 205 yards with 5 iron sliced about 30 yards right of the green and was one of the worst swings I’ve ever seen him make.  On the 3rd tee a big dog leg left lay up hole where our play is to hit 3 wood he hit another slice to the right edge of the fairway leaving 185 yards when you should have 100 yards or less into this hole. Walking to his ball we talked about why the ball is doing that and what he needs to feel now to improve his swing. Basically he was coming out of his posture to start the backswing and picking the club straight up without rotating his spine much.  I had him feel or more rounded turn with his chest which felt more inside while staying down. He took 3 practice swings and hit 7 iron to about 10 feet and he knew that’s what he needed to feel. From here on out he struck the ball very well the whole day but had a couple left misses and that was to be expected. After the round at dinner I told him that Monday morning we needed to go hit a small bucket on the range to “Feel” exactly what he needed to feel for his swing for the afternoon start of the US Amateur. I told him I didn’t want to talk about the swing at all during the tournament and that he needed to feel it and own it and let’s go play. On Monday am we met at the range at 10am for our short range session I immediately took him to the large mirror on the left side of the range and we reviewed what we were working on and I had him take several swings to feel the before and what we were working.  Then he hit balls and it felt and looked great, now he just needed to trust it and go play. I had him hit a variety of shots (fades, draws, high, low) just to know and execute and he did all of them at a very high level. I was impressed at how quickly he adjusted to this. 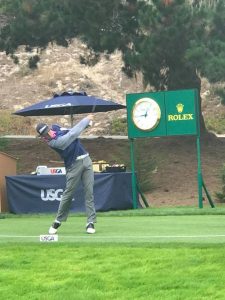 Round 1 at Spyglass Hill 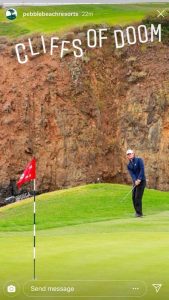 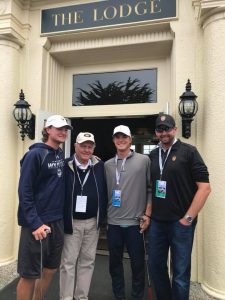 While we waited all afternoon the leaderboard didn’t change much in our favor however the USGA posted the projected cut at +4 which is where we were at and hoped to sneak in with a playoff chance.  We had lunch and putted for a bit and then got a chance to meet the legendary Jack Nicklaus and his wife Barbara as they were there to watch their son compete. What a treat to meet the Golden Bear!  We also got to meet Paul Azinger who Joey’s mom Nicol ran into in the gift shop. 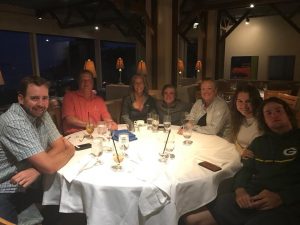 At almost dark with the last groups coming in we need the last 4 on the course to all make bogey to get a chance at a playoff and that’s exactly what happened giving him a 24 man playoff for just one spot. Last year he had a 13 man playoff for 8 spots which he made birdie on 10 at Riviera right out of the gate to secure his spot.  For those who don’t know last year Joey lost in the sweet 16 to Doug Ghim who ended up finishing in 2nd and became #1 amateur in the world this year and has recently turned professional. 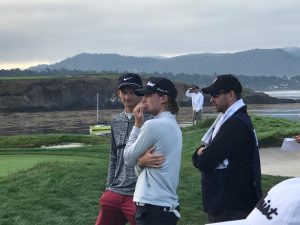 The Playoff
The goal was simple to go out and hit the best 4 iron he could and make the putt and wait and see if anyone would match him.  He was in the first group so it was a good opportunity to just get it done and see what happens. He had hit so many amazing long irons that I really liked our chance. Plus his experience last year stepping up and making birdie should help him in this very challenging situation.  The first guy to hit struck it perfectly right at the flag ending up 12 feet left of the hole. Joey stepped up and made a guided non committed swing that end up short right on the green and about 80 feet. He hit best long putt of the week to 6 feet and made it for par! Now we pray!  The guy who stuck it ended up blowing first putt well by and missed the second making bogey. The next group all made par but then in group three 2 guys stuck it close and one of them made it so we were out! Match play would have been awesome but it wasn’t in the cards this week but I know he learned a ton and I expect a huge bright future for him because of this experience. 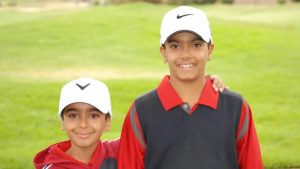 I would also like to congratulate Devon Bling who grew up in the FCG program and played with us his whole junior career. Devon lost in the final match and has now qualified to play in the Masters and US Open next year at just 18 years old!

Thank you for reading!  If you have any questions or comments on this please contact me as I would love to get your feedback. I also hope this helps some of you with your mental game.