Future Champions Golf would like to wish everybody a happy new year and we have kicked off our new year with two great events. The Kids Tour Spring Opener was held on Saturday January 7th at Oaks North Golf Course. Players gathered from all over the San diego area in order to kick off the new year just right. Oaks North Golf club provides a great training ground for any junior golfer with small greens and tight fairways just ask our CEO Chris Smeal who started his career playing and working at this great golf course.

The boys 13-14 year old had one representative show up for our Kids Tour Spring Opener. William Sung of La Habra Heights, CA showed up and killed it on the golf course. He shot a solid 62 (+2) for the tournament along with three birdies on the card. Congratulations William on qualifying for the Future Champions World Championship in July.

The girls 13-14 year old category had three girls show up and try to win the automatic entry into the prestigious World Championship event. Karen Zheng fought valiantly all day and with three pars on the scorecard wound up with a total of 86 strokes, good enough to win first place for the event! Sriya Avadhanam struggled a bit on the fast greens this weekend but managed to bring in second place for the event while Kylie Smolnisky ended in third place for event.

The boys 11-12 year old category had two boys duke it out for the honor of being called champion. Jacob Hering used the momentum of making three pars in order to catapult himself into the top spot and take home an invitation to this year’s FCG World Championship. Nicholas Chavarin had three pars of his own but could not find the bottom of the cup in certain holes and wound up with second place. 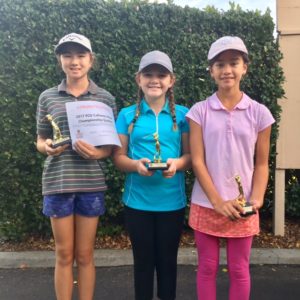 The girls 11-12 year old category had six girls sign up for the event and the competition was fierce right from the start. Kiana Glossner of San Diego, CA had a back nine to remember with six pars on the card en route to a solid round of 74 and an invitation into this year’s FCG World Championship. Katelyn Parr of Temecula, CA had seven pars on the day en route to a round of 80 and a solo second place finish for the day. Andee Avery of Carlsbad, CA had two pars on the card en route to a solid 82 and a solo third place finish. 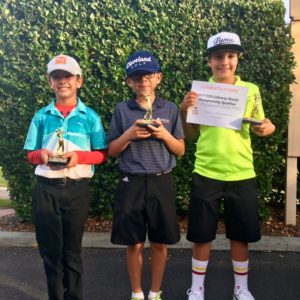 The boys 9-10 year old category had thirteen players sign up for the event by far the biggest field in the event. Ryder Rasmussen of San Juan Capistrano, CA had a round to remember with only five bogeys on the scorecard he managed to shoot a solid (+5) 65 and now has an invitation to play in this years FCG World Championship. Andrew Rodriguez of San Pedro, CA hung on to the leader for as long as he could but two costly holes on the back nine cost him the victory, he wound up shooting 70 and took home a solid second place finish. Kai Salinas of San Diego, CA had seven pars on the scorecard en route to shooting a solid 76 and took home a very nice third place finish for the event. 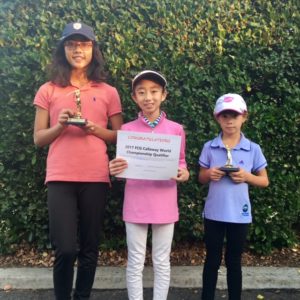 The girls 9-10 year old category had 9 girls sign up for the event and boy was it fun to watch these girls play golf. Jayne Sung had a very nice birdie on the second hole of competition en route to shooting 83 for the event which allowed her to take home the top prize for event as well as an invitation into this years FCG World Championship. Jasmine Lo was a beacon of consistency on saturday maintaining her errors at a minimum and shooting a round of 89 in order to wind up in second place for the event. Karina Jadhave and Zoe Salinas both had a great day around the greens and wound up sharing third place with a total of 91 strokes.

The girls 7-8 year old category had two girls shooting for gold this weekend. Charlotte Wilkins of Aliso Viejo, CA outlasted Janette Dunn of San Diego, CA in order to claim the top prize for the weekend as well as an invitation into the FCG World Championship. Janette Dunn fought valiantly and takes home a solid second place finish for the event.
Future Champions Golf is excited to begin 2017 with a plethora of great events designed to take your junior golfer into the next level of competition. We will be offering more camps, playing lessons, international tournaments as well as more opportunities to qualify for our exclusive FCG World Championship event in Mission Hills. For more information please visit our website for constant updates and information regarding our program.