Future Champions Golf visited Sycuan Golf Resort over the weekend for its annual Kids Tour Fall Championship. The final event of the season is always a memorable event especially at Pine Glen Golf course with fast undulating greens that can be a tough test for any golfer. Golfers from ages 6 to 14 gathered up on Saturday to end the Fall Series Season on a high note. The weather was absolutely perfect for golfers to try to go low on a par 3 golf course that does reward a great shot and will harshly penalize a bad one. 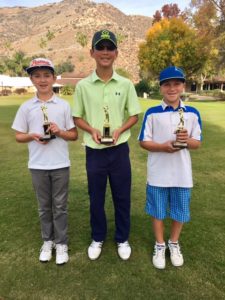 In the boys 11-14 division we had Jacob Hering pop in two birdies on the day en route to a victory with a 68 (+14) for the day. Christopher Liu tried his very best to keep up with the leader but ended up just one stroke behind the leader and took home second place. Ethan Howe had himself three pars for the day and ended up taking home a wonderful third place finish. 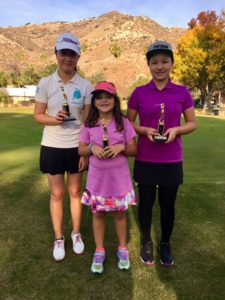 In the girls 11-14 division we saw some firepower from our winner, Leica Shen, with two birdies on the scorecard and a steady amount of pars, she was able to turn in a score of 58 (+4) for the championship. Mingxi Hong had herself five pars on the day en route to a solid second place finish. Emilee Canepa had three pars on the day and was excited to take home third place for the day. 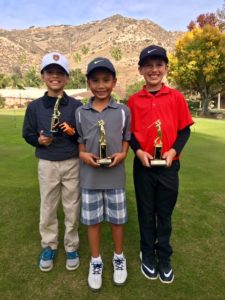 In the boys 9-10 division our winner Ace Pasqual decided to get the day started with a birdie and kept the momentum all through the round shooting a solid 61 en route to the victory. Jaiden L. Davis had himself a birdie on the 12th hole of competition and tied up second place with Thomas Browning who had himself 8 pars on the day. Well done, boys. 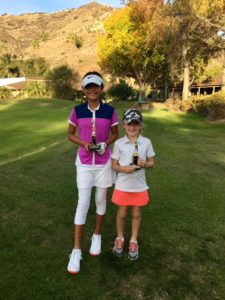 The girls 9-10 division had quite the battle coming down the stretch and competition was fierce throughout the day. Cooper Gilmore had six pars on the day en route to shooting a 69 and take home first place for the event. Sky Pascual had three pars on her scorecard and in the end wound up in second place all to herself. Jaden Barron and Isabella Itkin round up the podium positions both with a final round score of 74. 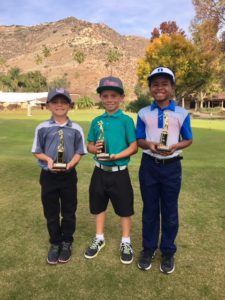 The boys 7-8 division had three boys sign up for event. Connor Szczechowicz had himself five straight pars at one point in his round and used that momentum to place first for the event. Ty Smock had three pars on the day and ended up with a solid second place finish for the event. Sage Brandon had a par on the third hole of the day and rounded up the podium with a third place finish. 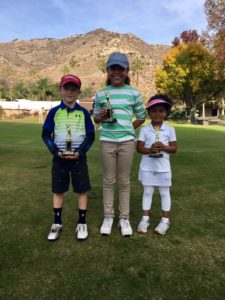 Marely Robinson was the lone representative for the girls 7-8 year old division and took home first place for the event after getting around the nine hole course in 48 strokes. Magnus Schairer was the only player signed up for the 6 and under boys category and shot a solid 43 in his victory lap. Taj Brandon was the lone representative of the girls 6 and under category and shot a great round of 54 strokes to get around a nine hole golf course.

It is always awesome to see the enthusiasm of the kids when they are arriving a golf tournament. Future Champions Golf is committed to growing the game and opening the doors for more junior golfers to find success on and off the golf course through junior golf tournaments. The life lessons learned on the golf course are one of a kind and we intend to keep pushing the envelope when it comes to providing premier golf events in premier golf courses. We hope to see you all next year at all of our kids and junior golf events.