Future Champions Golf is proud to be one the greatest junior golf tour around the world and nothing makes us happier than watching young kids take up the game and get better at it year after year. This past weekend Future Champion Golf held the Kids Tour Fall Series over at Rancho Carlsbad in Carlsbad. Kids from across the San diego joined in on the fun on Saturday all of them hoping to play their best golf and take home a podium position. 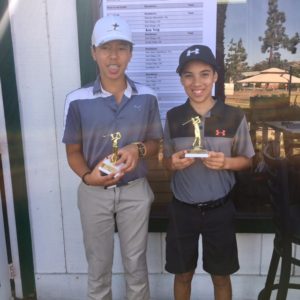 The boys 11-14 year old division had two representatives come out on Saturday morning but that’s not the say the competition was not fierce coming down the stretch. Nicholas Chavarin did not record a single birdie on the card but kept his mistakes to a minimum and edged out Nicholas Vila by three strokes to take home the title. Nicholas Vila had three birdies on the card but make a handful of double bogeys in order to come in just shy of first place. Well done, boys. 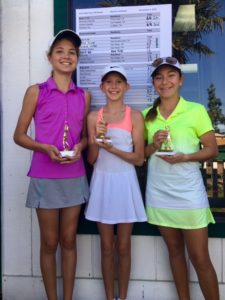 The girls 11-14 year old division had a four player field sign up for Saturdays competition and the players seemed eager to get the competition under way. Kristian Wilmes had an incredible back nine with six pars on the card and just a couple of blemishes, she used the back nine to catapult herself all the way to first place. Breegan O’Hearn came in a close second just two stroked behind the leader and with 8 pars on her round Breegan can be very proud of that second place finish. April Liu and Sofina Firouzi round up the competition and the podium by each of them carding a 72 to come in a tie for third place. Great job, girls. 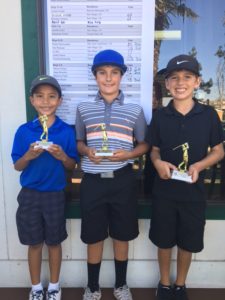 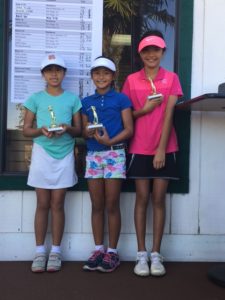 The girls 9-10 year old division had 7 girls sign up for the competition and they could not be more excited to get their tournament under way. Kahlea Manalang seemed to be excited when she made a couple of birdies throughout her round which catapulted her to first place in the competition. Summer Schafer and Sky Pasqual weren’t dressed the same on the Saturday but they still shot the same, tying for second place with matching 68’s. Liliana Ola Davis shot a solid 71 in order to come in fourth place for the tournament. Great job, Girls. 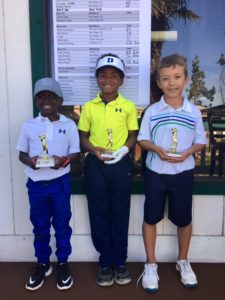 The boys 7-8 year old division had three representatives on the card and boy did they have some talent. Pierre Campa had himself three pars on the day en route to a solid 35 and a first place for the weekend. Sage Brandon had a par on the par 3 third and used that to catapult his way to second place. Mason Royal had a couple of pars on the card but could not shake those triple bogeys all day, he winds up with a very solid third place finish. 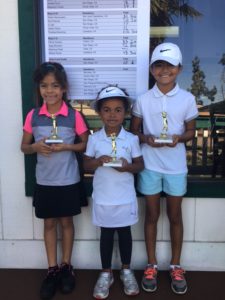 The girls 7-8 year old division had two representatives come out and try to gather up first place honors. Alejandra Torres had a magnificent par on hole 9 which gave her a chance to shoot 37 and first place honors for the weekend. Janette Dunn tried her very best out there on Saturday and managed to get in a bogey on number 5 and take home a second place finish for the weekend. The girls 6 and under age division had a sole representative in Taj Brandon whose tournament score of 50 included two bogeys on the card on holes 8 and 2. Way to represent, Taj!

Future Champions Golf is excited to announce some changes for the 2017 season. We implement these changes in order to provide our players with the most professionally run junior golf tournaments, the best competition and the best venues of any junior golf tour. Please check out our daily blogs on the website to stay informed of what changes are coming in the near future.