Future Champions Golf held its annual National Tour Fall Championship in beautiful San Marcos, CA. Twin Oaks was the site of the event with 18 pristine golf holes that offer tournament players plenty of opportunities for birdies but the undulating greens are tricky enough to cause some frustration. As the fall season comes to a close players from all over the world wanted to show off their preparation and hard work. 6 different age categories assembled upon San Marcos and the weekend proved to be one of the most exciting we’ve seen in quite some time. 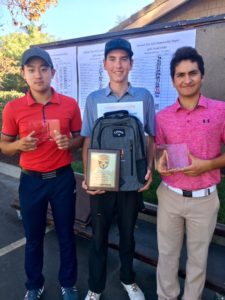 The boys college prep division had 15 tournament players when the first tee shot was struck. The easy front nine proved to be quite difficult for these boys as some narrow tee shots on the first few holes really caused some havoc for some players. Youssef Guezzale of La Jolla, CA had a great start to his tournament weekend with an opening round 70, he struggled playing with the lead early on Sunday but found his stride on the back nine to claim his spot on top of the podium. Vasilios Koumpakis of Athens, Greece fell 4 strokes behind the pace after one day of play and came out firing early on Sunday shooting a blistering 33 to sneak up on the leader but a triple bogey 7 on the 11th was a deadly blow to his momentum. A solid second place finish with rounds of 74 and 71. Jaden Park of Murrieta, CA rounds up our podium for the weekend and with rounds of 75 and 71 he took home a very well deserved third place back to Murrieta. 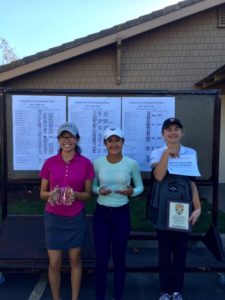 The girls college prep division had 13 players sign up for the event every single one hoping to have a good weekend in order to receive an invitation into next years Callways World Championship event @ Mission Hills. Serena Sepersky of Temecula, CA found herself one shot off the lead heading into the final round and a scorching 71 on Sunday helped her come from behind and secure the top spot for the weekend. Kayle Hunn of San Juan Capistrano, CA shot an opening round 72 and took a one shot lead into Sunday but struggled to bring it home on the back nine and ended up taking home a solid second place finish. Amanda Lee of Chatsworth, CA had two solid rounds in the 70’s and had a ho hum kind of Sunday with two birdies and 4 bogeys to shoot a solid 75 and take home third place. 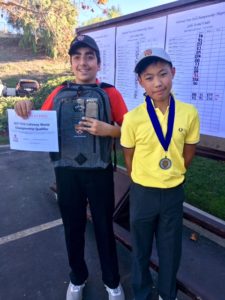 The boys 13-14 year old division had two players battle it out for the top prize. Arman Rahgozar of San Diego, CA used two birdies on the back nine on Sunday in order to put together a final round 80 and take home first place for the weekend. Steven Wang of China was consistent in scoring and fell 6 shots behind the leader on Sunday and took home second place for the weekend. 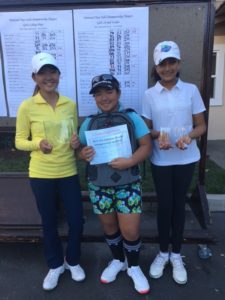 The girls 14 and under division had 13 girls sign up for the event and the scoring went low right from the start. Karen Tsuru of Carlsbad, CA used a first round 71 to gain pull away by 4 shots and shot a final round 77 to take the victory by four shots. Irene Park tried her very to chase down the leader and made a valiant effort shooting a final round 75 which landed her at second place for the weekend. Jiya Dalal of San Diego, CA used a first round 76 to be able to climb up the leaderboard and stay at third place for the weekend. 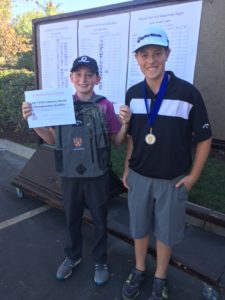 The boys 11-12 age division had two golfers battle it out for first place. Ryan Voois of Ladera Ranch, CA shot two stellar rounds of 73 and 75 in order to claim the top spot for the weekend. Coming in, in second place is Matthew Broder of San Diego, CA. 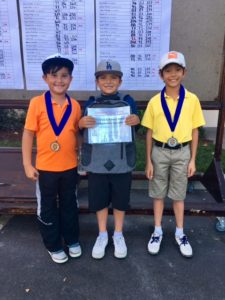 The boys 10 and under category had three players show up for the event and the enthusiasm of competition was very noticeable among these young faces. Connor Herrera of Stevenson Ranch, CA had himself a wonderful weekend because he took home the coveted first place finish. Kai Salinas followed him up in second place and Quincy Costales rounds up the podium for the weekend.

Future Champions Golf would like to thank all of the volunteers, parents, golf course staff and management that made the National Tour Fall Series possible. It is our goal to provide juniors with the best professional style tournaments in order to provide kids with a chance to learn and grow. We thank everyone for their support throughout the year and hope to continue to provide San diego junior golfers with great events such as this one.