Future Champions Golf Tour geared up this past weekend at Riverwalk Golf Club for the San Diego City Classic. It was a great weekend to play golf as temperatures skyrocketed bringing a little heat to San diego but it would cool off with a strong ocean breeze by the time junior competitors teed off. Riverwalk GC is a great golf course located in the heart of San Diego with some wide open fairways that don’t penalize a player for a mistake off the tee but will definitely make for a tricky approach shot into the green if a player is out of position. The weather was great and these junior golfers were ready to make some birdies, let’s see how they did. 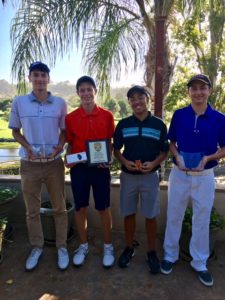 The boys college prep division had a huge field with more than 30 participants from all over the western time zone of the United States the elite field brought out some of the best golf in these players. Ryan Smith took this opportunity to showcase his putting skills with nine birdies and a two day total of 140 (-4) which gave him a three shot victory. Haythem Yousif had a second round to remember shooting a tournament low 69 that included five birdies which was good enough to grab second place. Matthew Moss and Derek Kim roundup our winners for the college prep division shooting a two day total of 144 (E) for the tournament. Great job guys, keep those birdies coming. 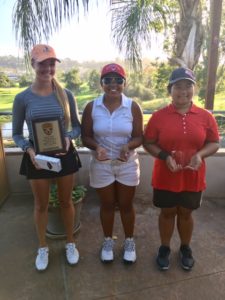 The girls college prep division had eleven girls competing for the top three spots and these girls did not disappoint with the quality of golf that was displayed. Claire Hogle had two masterful days of consistent golf that included six birdies in two days, good enough for a 153 (+9) for the tournament and the top spot in our San Diego City Classic. April Ranches tried her very best to come from behind but the putter was as cold as ice on the second day of action she placed second with a two day total of 159 (+15) for the tournament. Kathleen Keomahavong was a beacon of consistency shooting two rounds of 80 which was good enough to land her in third place at (+16) for the tournament. Great job girls! 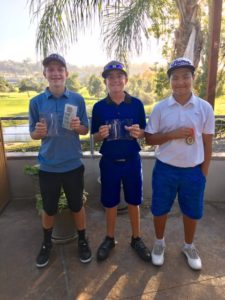 The boys 13-14 year old division had a total of 8 players competing for the honor of being called champion. Nolan Ward of La Jolla seemed to wake up on the right side of the bed on Saturday and Sunday with respective scores of 71 and 72 which allowed Nolan to breeze by the competition and take first place honors. Jack Townsend shot a masterful final round 72 to come from behind and claim second place honors all to himself. Brian Xu had two solid days of golf ending up with a two day total of 152 (+8) for the tournament and third place honors. Well done boys, let’s keep making those birdies! 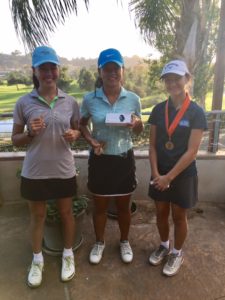 The girls 14 and under division had a tough time battling the windy conditions out at Riverwalk GC but mental toughness is a strength learned from these kind of events. Summer Yang did not let the conditions affect her golf game as she stroked in four birdies over the weekend and came in with a two-day total of 158 (+14) for the tournament and good enough to win first place. Anna Poon ended up just one shot back of the leader knocking down four birdies of her own and a great second place finish. Victoria Lee played great throughout the weekend and her two-day total of 165(+21) for the tournament was good enough to land a third place finish. 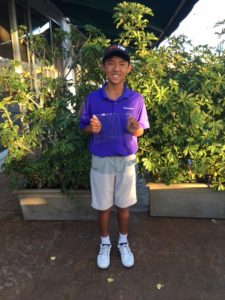 The boys 11-12 division had a sole representative with Dylan Oyama shooting a masterful 78 that included twelve pars. Great going Dylan! 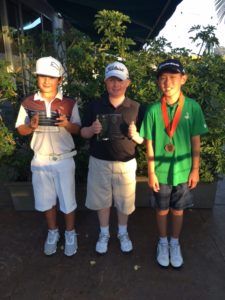 The boys 10 and under division had 6 junior golfers competing for the top three spots. Kent Karlstrom of Rancho Mirage shot a magnificent 78 that included a birdie on the last hole to seal up the victory. Antonio Barbosa found a rhythm during the middle of his round and used that momentum to come away with a second place finish with a round of 84. Michael Geng ended up just one shot back of second place using a birdie on the eighth hole to catapult him to a third place finish. Great going kids!

Future Champions Golf Tour would like to thank everybody that puts forth the effort to providing a great atmosphere for junior golfers to learn and develop their golf game. We would like to thank Riverwalk GC for their hospitality and their continued support of junior golf. Thank you to the parents and the players for making this event a great success. Come join us for our next events and test how much your game can improve!