FCG to sponsor the GKS Ryder Cup at Hansen Dam on December 9, 2017

Hansen Dam has a full driving range, chipping and putting so take advantage. I would like to have everyone meet near the starter window at 10:15 for general information and team name announcements!

We will be playing the Hansen Dam forward junior tees mark with Yellow for a total distance of 5466 yards. 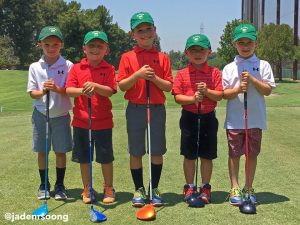 The format is BEST BALL for the Front 9 and SCRAMBLE for the Back 9.
Front 9 – Best Ball: Both golfers play their own ball throughout the round. The better score of the two golfers in a team determines the team’s score on a particular hole; the score of the other member of the team is not counted.
Back 9 – Scramble: Each player strikes a shot, the best shot is selected, then both players play from that selected position. This continues until the putt is made. The first ball that goes in the hole is the team score!

I have a few prizes set up. We will have two Longest Drives….the youngest boy on the team (listed on the left) for one and the oldest boy on the team for the other. There is a prize for each winner. Both longest drives will take place on the 6th hole.
I also have a Closest to the Pin for everyone on the 7th hole! Closest to the pin wins the prize!
I have an added bonus somewhere in play as well.

After the round I have gift bags, prizes and of the course the GKS Ryder Cup trophy presentation!

Once again this year we are lucky enough to have Mpu Dinani take action stills of all the boys. So dress sharp and look good!

If you are on Instagram, I have a page that I will be posting on so keep an eye out on @gksrydercup