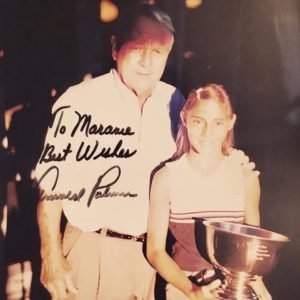 In 1999, I was 9-10 Division [then co-ed] national champion of the inaugural [former Golf Channel’s] #DriveChipAndPutt Competition [Presented by#CallawayGolf]. After 3 separate qualifying days, all national finalists made our way out to #ArnoldPalmer‘s #BayHill Club & Lodge close to Orlando, FL. Aside from staying at the resort, I had the privilege of playing the course… and the even greater privilege of meeting golf’s greatest.

My father always had a very accurate intuitive nature (of which I believe I inherited) & he paid for an extra couple days to just soak up where we were at and enjoy the experience. Luckily for me, the universe was extremely on my side as “The King” was eating in his own restaurant, at his own resort… probably drinking his own drink. [Now you sweet beverage drinkers really know who the “Arnold Palmer” half lemonade/half iced tea drink is named after].

I think we were getting ready to head to the airport or something of the sort because my 1st place cup was near by, hence this special picture my father took. Bad lighting as it was late in the day… but the moment itself lasts forever. Overachieving in his fathering skills… my angel 👼🏻 figured a way to have this picture sent out to Arnie’s peoples to just make it the absolute cherry on top… to have it signed. Best believe, it sits in a frame among pictures with the other golf greats & my most prestigious accomplishments [thus far].