The Future Champions Step Up Tour made a stop at the always familiar and great Sycuan Golf Resort in El Cajon, CA. This tour has been a proving ground for players working on their tournament resumes in order to make the leap into the bigger tours on the Future Champion schedule. The weekend provided a great atmosphere and awesome weather that allowed junior golfer to fully enjoy this great tournament. 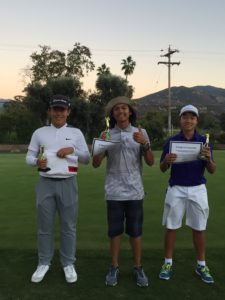 The boys college prep division had eight participants sign up for the chance to test their golf skills on the always great Oak Glen golf course. Competition was fierce throughout the day and in the end two golfers had to play extra holes in order to determine a winner. Eric Zhang and Nikko de Castro each shot a great round of 75 with six birdies between the two of them. In the end Eric Zhang came out on top after one playoff hole leaving Nikko de Castro at second place. Ryan Bao played a great round of golf shooting a 76 leaving him one shot off the playoff. Great playing boys, it looks like you guys are ready to start playing the bigger FCG events! 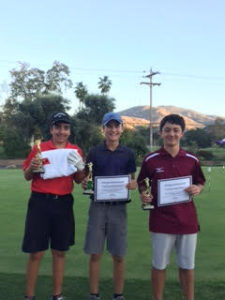 The boys 13-14 year old division had four players register but that didn’t take away from the competitive nature of these boys. Ethan Weissman had a great back nine shootiing a two-under 35 on his way to claiming first place with a glorious 76. Johnny Campbell had himself a birdie on hole 15 which he used to catapult himself to a second place finish. Arman Rahgozar is becoming a staple on the podium lately finishing up at third place with a solid 85. 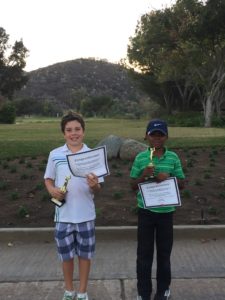 The boys 11-12 year old division had two representatives and they had a great time playing golf that day. Benjamin Singer carded a great birdie on hole 15 which he used to gain momentum and place first place for the tournament. Elijah Goulbourne equaled Benjamin’s birdie on 15 but could not find momentum early and ended up with a great second place finish. 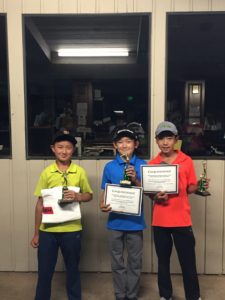 The boys 10 and under category had seven participants and the scoring was really on fire. William Ma had himself a great day on the greens putting four birdies on the card en route to a wonderful 75 and a first place finish. Jay Leng Jr. tried his very best to keep up carding two birdies of his own on holes 7 and 15 en route to a solid 78 and second place honors. Colin Li played a great round of golf with two birdies on the card but a tough stretch of holes cost him a bit, a solid 80 for Colin place him on the podium with a third place finish. 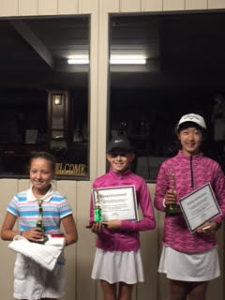 The girls 14 and under category had a great field of eight participants and they had a great time trying to tackle Oak Glen on Saturday. Kristian Wilmes and Emily Shi ended their rounds tied for the top and needed extra holes to decide a winner. Kristian Wilmes came out on top after just one hole of the playoff while Emily Shi takes home a solid second place finish. Sofia Torres is making waves on the tour coming up with a solid third place after just her second event.

Thank you very much to all the volunteers for running these events along with the junior golfers parents that make these events possible. Don’t forget to join us for our next events happening all throughout the Southern California region.