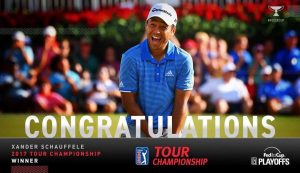 Here is a link to his 17th Place finish at the 2009/2010 FCG National Championship which back then was named the San Diego Junior Amateur Championship. Xander finished T17th that year and now he is the PGA Tour Championship Winner and the 2017 PGA Tour Rookie of the Year! DREAM BIG AND WORK HARD KIDS!!!: https://fcg.bluegolf.com/bluegolf/fcg10/event/fcg102/contest/50/leaderboard.htm