Yesterday, the Kids Tour headed to Reidy Creek Golf Course. Every hole is unique and the undulating, well maintained greens are protected by dramatic bunkers and water features. You’ll notice the front nine is tighter than the back nine and the holes are generously spaced as you glide through this natural layout at the base of the Escondido mountains. Now let’s see how our participants did: 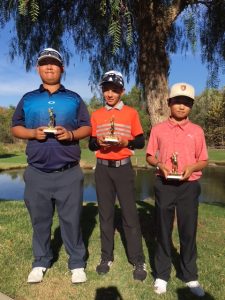 In the Girls 11-12 division, we had lone soldier Jaden Barron shoot 74 for her trophy. 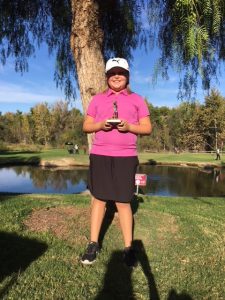 In the Boys 9-10 division, we had a two-way tie for first place at 58 between Connor Herrera and Srinesh Namburi. After a two hole sudden death play-off, Herrera won and taking home second was Namburi. Coming in third place was Jaiden Davis with a score of 62. 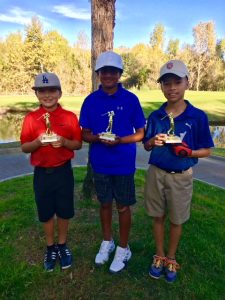 For the Girls 9-10 division, we had another two way tie, between Amelia Chavez and Liliana Davis who both shot 65. After a one hole sudden death play-off, Chavez won first and Davis took home second. There was another tie for third place at 66 between Karina Jadhav and Vanessa Lizbeth Moreno Reyes, determined by a card-off. Card-offs are determined by back nine low score so wining that card-off was Moreno Reyes. 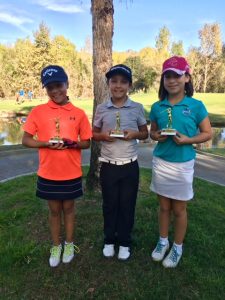 For the 7-8 divisions, we had lone soldiers for both genders. Taking home the girls trophy was Regina Ambriz with a score of 35 and the Enzo Taylor took home the boys with a score of 32. Pictured with them is the Boys 6-Under division with Cruz Garcia taking home first who shot 50 and coming in second was Dewey Back with a score of 54. 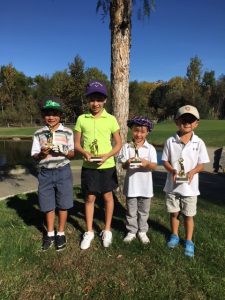 Shout out to all participants, placers, parents and of course the Reidy Creek Golf Course staff for hosting us this past weekend! Until next time, kids tour… Tournament Schedule