Future Champions golf headed to nearby El Cajon to host a Kids Tour event at the beautiful Sycuan Resort on the Pine Glen course. The executive course has challenging tee shots and undulating greens that provide a challenge and learning opportunity for golfers of all ages. Without wasting any more time let’s move on to our tournament recap. 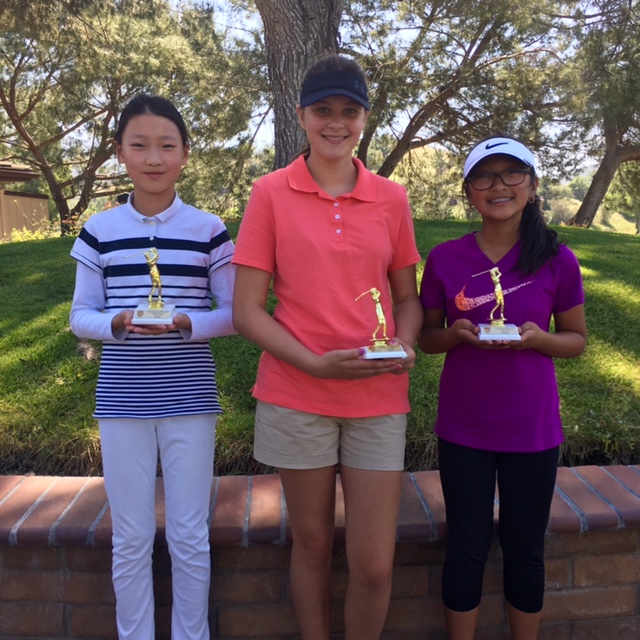 The Girls 11-14 division was the first to come in to the scoring table after the completion of their round. Muzi Wei from La Jolla shot 64(+10) and took home the championship award. Second place is awarded to RHenna Basilio from Chula Vista after her round of 80(+26). Lastly, Mackenzie Karl from San Diego shot 100(+46) to solidify her third place finish.

Antonia Barbosa from Chula Vista leads the pack for the Boys 9-10 division and takes home the first place award after shooting 55(+1). Second place goes to Jay Xu from Burnaby, BC after he shot 59(+5). Michael Geng from San Diego shot 60(+6) and is awarded the third place trophy.

The Girls 9-10 division follows right behind the boys with Elise Liu from Richmond, BC finishing in first place after her round of 62(+8). Kayla Geng from San Diego took second place after she shot 65(+11), only three strokes off the lead. Lastly, Sky Pascual from San Diego shot 68(+14) and takes home the third place award.

The Boys 7-8 division would come in first for our 7-8 divisions after playing 9 holes of the 18 hole executive course. Ryan Zhao from San Diego, CA shot 34(+7) and won in a playoff against Ace Pascual from San Diego. Pascual takes second place, while Zhao rests in the championship spot. Yu Ohashi from Kumamoto Japan took home the third place trophy after making a par on the last hole to shoot 36(+9) and to also win the card off.

The Girls 7-8 division followed the boys in to the scoring table with some excellent scores and yet another playoff. This time, Summer Schafer from Ramona, Ca and Jordin DeOcampo from Chula Vista would go head to head after both players shot 40(+13). Schafer would end up taking home the champions award after winning in the playoff holes and DeOcampo takes home the second place award. Isabella Itkin from La Jolla ,CA is awarded the third place trophy after she shot 42(+15).

The six and under divisions feature two players who, though in different divisions, would battle against each other for the fun of it. Zoe Salinas from San Diego would represent the girls division and Colton Rodgers from Great Falls, VA would represent the boys. Colton would shoot 40(+13) and takes home a first place trophy. Zoe Salinas would also shoot 40(+13) and takes home her very own first place trophy.

Future Champions Golf would like to extend thanks to all staff, volunteers, players, and of course, the parents. Without all of you, FCG would not be able to provide the competitive and exciting atmosphere that we have all come to enjoy at events of this magnitude. Future Champions Golf would also like to recognize Sycuan Resort for all their assistance and allowing us to host our event at their facility. Finally, we would like to offer a special thank you to Callaway Golf for providing a sleeve of Callaway Chrome Soft golf balls as a tee prize to all competitors. Once again thank you for all the support, we look forward to making your next experience with Future Champions Golf as rewarding as this one!