Last weekend the Kid Tours had it’s finale event of the season, the Spring Championship! This event is worth double points and ends the points race that was from January till this event! With every hole being less than 110 yards, Colina Park includes elevated tee boxes and contoured greens, giving golfers the opportunity to get creative with their skills. Enjoy walking an 18-hole round of golf in less than three hours. It’s a great way to get some exercise while having fun and improving your game. Let’s see how they did:

For the boys 13-14 division, we had lone soldier Charlie Quesada shoot 64 for his trophy. (Not pictured)

For the girls 11-12 division, we had Roro Mina shoot 57 for first, Emilee Canepa shoot 67 for second and coming in third place was Jaden Baron one stroke back at 68. 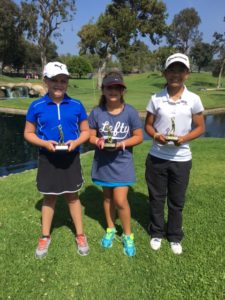 For the boys 11-12 division, Diego Torres shoot 71 for first and Yihao Liu shoot 72 for second. 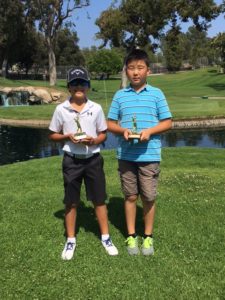 The girls 9-10 division saw Sofia Gomez-Inowe shoot 57 for first, Renee Wang at 66 for second and coming in third place was Yawen Yang at 73. 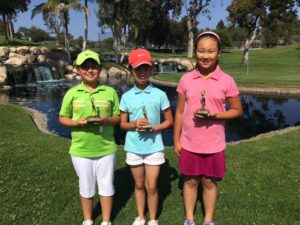 The boys 9-10 had Tyler Jennings shoot 58 for first, and Srinesh Namburi shot 60 for second. There was a three-way tie for third place at 68 between Horry Ren, Lance Lau and Lavelle Teague! How we determine a tie for a shotgun start is going hole 18 backwards, and Lance taking home the trophy. 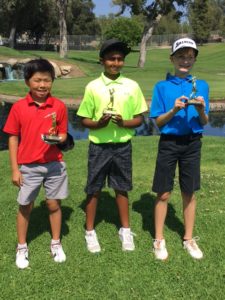 For the girls 7-8 we had lone soldier Regina Ambriz shoot 81 for her trophy, pictured with our 6-under girls: Miroku Suto who shot 61 for first and taking home second place was Srinika Mupparaju who shot 99 for second.

For the boys 7-8 division we had Santiago Torres shoot 75 for first, and coming in second was Thorben Dugdale who shot 90. Pictured is the 6-under champ: Owen Kaese who shot 83. 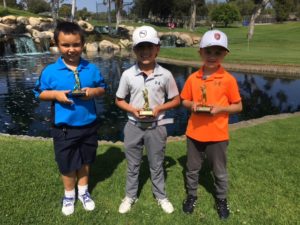 A wonderful finale event to our spring season, big congratulations to all placers. Even bigger thank you to all participants, parents and the great staff at Pro Kids Colina Park for always being so welcome to us! Hope to see you all in the summer season… Tournament Schedule