It was an awesome weekend for Future Champions Golf as the tour headed over to Colina Park Golf Course for our Kids Tour Fall Series Event. The weather could not have been better and eight different flight categories were in attendance which makes for some great competitive golf. Excitement was in the air while every junior golfer was warming up on the practice range, each one determined to make this round their absolute best. 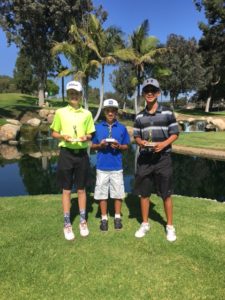 The boys 11-14 age division had a field of seven players and saw some great golf being played. None better than Christopher Liu who had five birdies on his card en route to an even par 54 and the first place honors. Ryan Marshall had four birdies of his own but found some trouble on hole twelve and thirteen and wound up three strokes back good enough to bring home second place. Nicholas Chavarin added one birdie to the card and took home third place with a total score of 62 eight over for the tournament. Great playing from these three boys, great job making birdies! 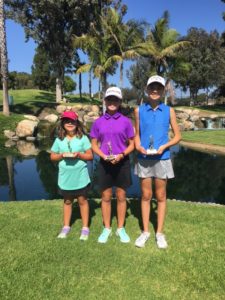 The girls 11-14 age division was a hard fought battle for first place with Breegan O’hearn coming out on top and shooting an eight over 62 for eighteen holes. Great playing Breegan! Emilee Canepa was a steady machine of bogeys and pars with only two doubles on the card she managed to take home second place with a score of 67. Carissa Freeman had an up and down day on saturday carding an incredible three birdies but found some inconsistency on the back nine en route to a 68 good enough for third place. Well played girls! 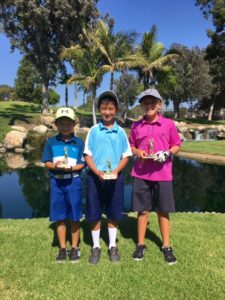 The boys 9-10 year old division had a trio that played some incredible golf and saw the best cumulative scores in all of the division. Colin Li had himself a great day on the greens making four birdies and only dropping two shots all day en route to a tournament low 52 two under par which got him first place in his division. Ethan Keusch gave chase on the back nine carding three birdies in the span of five holes but came up two shots short and took home second place. Evan Liu had four birdies of his own including a great one on the last hole en route to shooting a two over round of 56 and a great third place finish. Solid playing from this group, watch out older golfer these young guns are coming for ya! 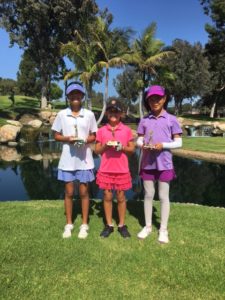 The girls 9-10 year old division had a great time tackling the Colina Park Golf course and nobody had a better time than Sky Pascual whose round of 59 five over par was good enough to land her a first place finish. Sarah Zhao tried her best to give chase on the back nine when she knocked in a birdie on hole fourteen but ended up shooting a 66 which was solid enough for second place. Danica Williams is seeing some great results from her hard work as she took home a third place finish with a round of 69. Great going girls! 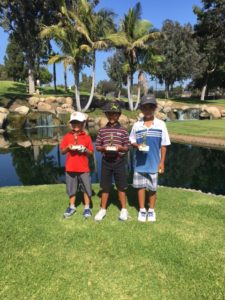 The boys 7-8 age division saw a familiar face on the podium on Saturday. Jeffrey Kim was a great example of consistency putting up twelve pars on the card and claiming first place honors for the day. Ace Pasqual carded a birdie on the front nine en route to shooting a solid 67 good enough to claim second place in the division. Trenton Bascon played some solid golf on saturday and managed to put up a 69 which was good enough for third place. Great playing boys! 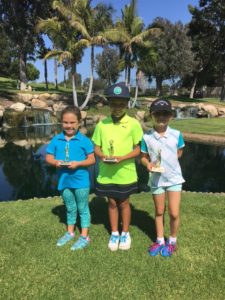 The girls 7-8 age division had a great time on Saturday and nobody had more fun than Emma Molina who found a groove early and birdied three times en route to a 63 which landed her the top spot for the tournament. Isabella Itkin birdied that last hole of competition in order to shoot a solid 65 which was good enough to take home second place. Liliana Ola Davis executed some awesome golf shots on saturday and took home a third place finish with a score of 69. 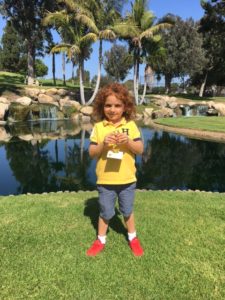 Benjamin Itkin was the sole representative for the boys 6 and under group and played a solid round shooting 77 with two birdies on the card. Great playing Benjamin! 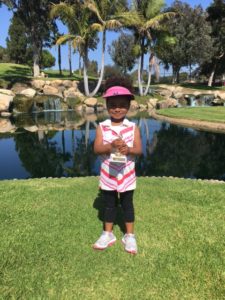 Taj Brandon was the sole representative for the girls 6 and under age division and played great including a birdie on the last hole of regulation that allowed her to take home some great memories!