Future Champions Golf visited the always popular St. Mark Golf course on Saturday, January 28th. Junior Golfers from all over the San Diego area flocked to San Marcos in order to be part of the Future Champions Kids Tour Spring Series! The boys had the option of playing in 4 different age categories while the girls had the opportunity to sign up for 3 different age groups. The San Diego sun decided to peek out through the clouds over the weekend allowing for players to enjoy their stroll around the St. Mark Executive course. Let’s see how they did.

The boys 13-14 year old category had a lone representative for the weekend Bryan Pomeroy who had a par on the par 3 12th en route to having a great day on the golf course. He took home the first place trophy for the day along with some valuable points towards the player of the spring series award. 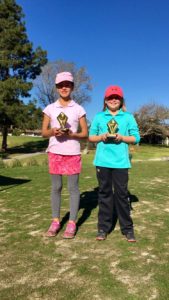 The girls 11-12 year old category had four girls sign up for the event, Andee Avery, Jaden Barron, Alexa Ortiz and Nyla Brown. Alexa Ortiz had three pars on the day and ended up in third place after 18 holes of play. Andee Avery and Jaden Barron needed extra holes to decide a winner. In the end, Andee Avery was outdone in the playoff by Jaden Barron. 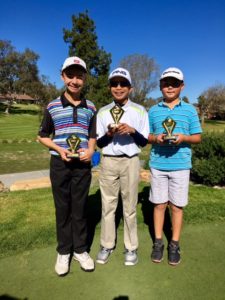 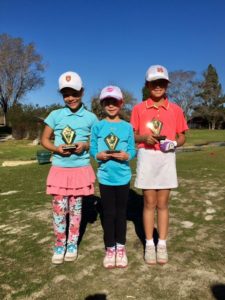 The girls 9-10 year old girls category had five girls sign up for the competition. Summer Schafer, Zoe Salinas, Liliana Ola Davis, Karina Jadhav and Amelia Chavez were so excited to partake in such an awesome event. Liliana Ola Davis had six pars on the day including five straight on the front nine which catapulted her to third place. Zoe Salinas had four pars and one birdie for 18 holes en route to shooting a 74 and taking home second place. Summer Schafer of Ramona, had two birdies on the day and made minimal mistakes en route to shooting 73 and taking home first place by only one stroke. 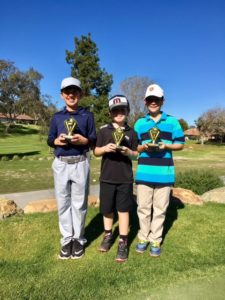 The boys 9-10 year old category had by far the most participants with 10 kids in the sign up sheet. Daniel Chazen of Carlsbad had a plethora of pars and one birdie on the day en route to shooting a solid 69 and taking home third place honors for the event. Chris Anguelov of San Diego had a solid front nine 30 and followed it up with a 35 for a solid second place finish. Thomas Browning of Carlsbad, shot a lights out 29 on the front nine and turned in a solid 34 on the back en route to winning the tournament by two shots. 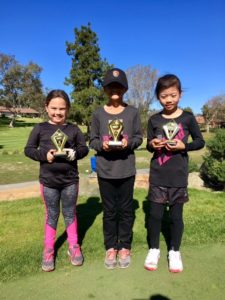 The girls 7-8 year old category had 4 participants, Janette Dunn, Alejandra Torres, Kate Hu and Emma Molina. Alejandra Torres had a great opening hole par using that momentum en route to a solid third place finish. Kate Hu of San Diego was a beacon of consistency on the greens en route to a solid second place finish. Emma Molina of La Mesa had a great day with four pars and birdie on the third hole and won the competition with a solid 34. 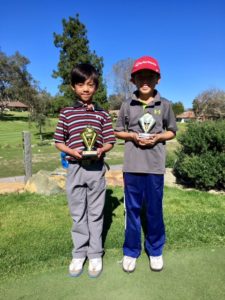 The boys 7-8 year old age category had two participants battle it out, Trenton Bascon and Maximus Peek. The boys had so much fun playing that day that they decided to go to extra holes. Trenton Bascon of San Clemente came out on top at the end of the day and took home the FCG trophy. Maximus Peek fought valiantly and takes home a very respectable second place finish.
Future Champions Golf is excited for the 2017 season, so far we have had great tournaments filled with emotion and excitement. We are very excited to be offering more than 100 events a year that allow junior golfers to train and showcase their talent on the links. We are working very hard on developing more opportunities for Junior Golfers to showcase their talent in front of College Coaches in order to open the door to amazing possibilities. Do not forget to keep up with our daily information at https://futurechampionsgolf.com/tournaments/