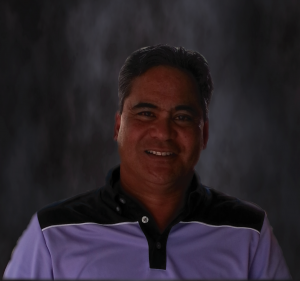 About Greg
In 2006, golf teaching professional Greg Dumlao started Future World Golf (not be confused with Future Champions Golf)
and has trained, mentored and prepared junior golfers of all ages to take their games to the highest level of competition. Based in
the San Francisco Bay Area, Greg has created an environment that is conducive to learning to play the
game of golf. Having been a teaching professional for over 20 years he realized that while he was
coaching golfers on the driving range, all he was doing was teaching them how to swing a golf club. He
wasn’t coaching golfers how to play the game. After spending a few years coaching for an after-school
golf program. His passion for working with juniors grew stronger while watching his students improve
quickly and become dedicated to playing game. It was at that point he decided to break away from the
after-school programs to develop a method to help them advance to higher levels. Working closely
with every junior and their parents, he has created an environment which has in place a support team
for each golfer. In essence, they become, TEAM NICK; or TEAM DEBRA;. Taking his experience as a
former amateur and professional tournament player, he tries to instill the work ethic and skills that are
needed to be the best competitor that he or she can be. All of which is carried over into their school
work and personal life. This now proven method has helped to develop not only some of the top junior
golfers in Northern California, but also across the United States and some countries in the Pacific Rim.
Many who have been successful in competing at the local, state, national and international
tournaments.

“For years I’ve brought my students to play in various FCG tournaments to give them the opportunity to play in quality, well organized high caliber levels of competition. I feel it’s an important component to the development of a competitive junior golfer. So I felt it was only natural to partner with FCG and bring the tour to Northern California. ” – Greg Dumlao

Greg has hosted FCG events in Northern CA annually for 4 years and will be bringing more events to different areas over the next several years.  These events will expand our National Tour, create more opportunities for players to qualify for the prestigious FCG Callaway World Championship, and much more.

Results from our recent FCG Nor Cal Championship

Contact us anytime for more information at info@futurechampionsgolf.com or 844-324-2377