Future Champions Golf hosted the 2017 National Tour Spring Series Opener at RiverWalk Golf Course in San Diego, CA. The tournament reached its maximum capacity as players were excited to get the season underway. Riverwalk golf course has been a great ally in the development of the Future Champion National Tour hosting more than 3 events a year at this great golf course which always has fast greens. 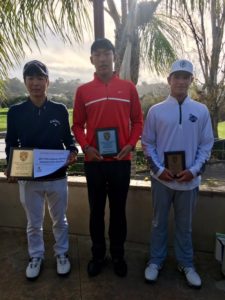 The boys college prep division had 46 players from all over the world sign up for the National Tour Opener making it one of the strongest opening field in FCG history. The boys were having a blast as conditions were optimal and the greens were receptive which made for a lot of birdie opportunities. Yu Osawa of San Diego, CA had eleven birdies during the weekend and only dropped four shots which catapulted him to the top of leaderboard with a two day total of 137 (-7) for the championship, well done. Bo Jin of Encinitas, CA was a model of consistency throughout the weekend just making three bogeys in two days but the birdies just did not want to fall for Bo on Sunday leaving him at second place. Drayton Joseph of San Clemente, CA had a great back nine on Sunday that helped him jump into a tie for third place along with Tommy Chung of Placentia, CA and Hyunjin Kim of Encinitas, CA. 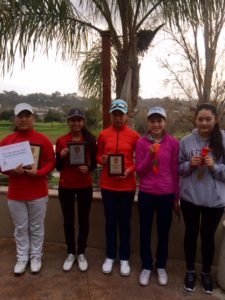 The girls college prep division had 26 girls from all over the world sign up the National Tour Opener making it one of the strongest opening fields in FCG history.  The scores were phenomenal throughout the weekend with players making tons of birdies and the winners shot two rounds in the low seventies. Mina Yoon of San Diego, CA had six birdies on the weekend and only a few dropped shots which allowed her to shoot two rounds of 75 for a two day total of 150 (+6) for the first place finish. Divya Tadimeti of Palo Alto, CA had a back nine of Sunday to remember shooting an even par 36 to get back in the hunt for first place with a solid 75 which landed her in second place for the weekend. Joys Jin of Encinitas, CA and Nicole Whiston of San Diego, CA shot identical scores of 153 (+9) in order to end up at tie for third place. Sophia Ban came all the way from Vancouver, CA and shot a final round 75 to jump up all the way to fifth place after an opening round 79. 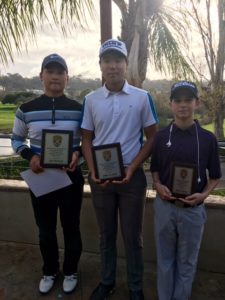 The boys 13-14 year old division had nine players sign up for the event and the competition proved to be one of the most intense of the weekend. Hyun Woo Lee of Korea shot an opening round 69 to become the overnight leader by the three strokes over fellow countrymen Ji Seong Park. Hyun did not back down on Sunday shooting a solid 73 in order to take the title by five strokes over Ji Seong Park. Jack Smyth of Tustin, CA had a great final round of 72 in order to catapult himself into third place for the event. Achuth Krishna of San Diego, CA shot an opening round 75 and was just six off the lead but a final round 77 landed him in fourth place for the weekend. Nikko de Castro of National City, CA had an eagle on the par 5 12th on Sunday and used that momentum to end up in fifth place for the event.

*Congratulations to Hyun Woo Lee of Korea for qualifying for the prestigious FCG World Championship in Mission HIlls, CA. 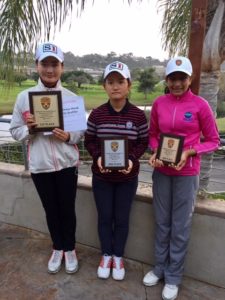 The girls 13-14 had 8 players sign up the event all pining for the opportunity to get an invitation to play at Mission Hills in July. A Young Jeon of Las Vegas, NV had three birdies on the weekend including two on the front nine on Sunday and took home first place with a two day total of 154 (+10) for the event. Yeo Jun Park of Las Vegas, NV was tied with first round leader a Young Jeon after a round of 77 but could not hang on to lead down stretch and a bogey on the final hole cost her the tie for the championship. Jiya Dalal of San Diego, CA used a final round 81 in order to jump up a couple of spots after an opening round 88 in order to claim third place for the weekend. Kailee Miller of San Diego, CA had four birdies on saturday en route to a solid fourth place finish. Diane Tang of San Diego, CA wound up in fifth place for the tournament after a second round 85 ten strokes better than her first round.

*Congratulations to A Young Jeon for qualifying for the prestigious FCG World Championship in MIssion HIlls, CA. 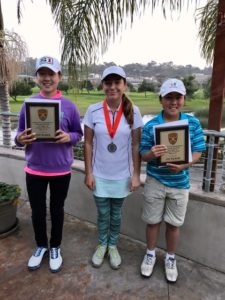 The boys 11-12 year old category was represented by Benjamin Chin of Greenwood Village, CO and used the opportunity the shoot 13 pars for the weekend and take home an invitation to the FCG World Championship in July. The girls 12 and under category had two representatives join in on the fun. Jung Won Choi of Las Vegas, NV shot an impressive final round 80 in order to take home the top prize for the weekend. Sofina Firouzi of Rancho Sante Fe, CA took home second place honors with a two day total of 178 strokes.
Future Champions Golf reminds everybody to check out our 2017 schedule and register for events as soon as possible. We are only six months away from hosting two of the largest junior golf events in the country the FCG International and the FCG World Championship so players should be on the lookout to start training and practicing to qualify for these amazing events. Check out our website for information on tour events, academy events and news about the junior golf community.