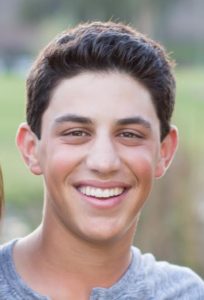 Personal Statement: I’m a relative new-comer to golf, having only played golf regularly starting the Summer heading into my Freshman year of High School, and playing my first competitive (non-high school) tournaments during the Spring of my Sophomore year of High School.  So, while I’m satisfied that I’ve made great progress, getting my index down to 4.5, I know that my game will continue to evolve and I have high expectations for myself this coming season and this coming Summer.  While I’m a relative new-comer to golf, I’m no stranger to performing under pressure.  My twin brother Benjamin) and I are a professional music duo called “Sharp Turn Ahead” (acoustic pop), have been performing, writing and recording since we were 12, and at the age of 15, signed a publishing and recording deal with a company out the U.K.  From the ages of 12 to 15, while many of my golf competitors were starting to groove their swings, my brother and I were “grooving” our live music performances, having performed more than 200 shows during that period of time.  In that respect, performing live music (playing guitar and singing) on real stages, in front of real audiences (largest crowd of roughly 1,000 people), including at venues like the House of Blues in Dallas and the Coach House in San Juan Capistrano, is tremendous pressure, and that training prepared me exceptionally well to handle the pressures of tournament golf.