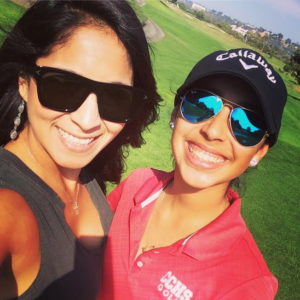 Pursuit of Golf
by Eliza Lozano

“I want to play golf, Mom,” is how it all started in August 2013. My mom was a bit puzzled since I had never watched golf and no one in our family had played golf, but I for some reason wanted to give it a shot.

So I went to the range with a friend of my mom’s to see if I would even like golf. Tryouts were only two weeks away and I had never swung a golf club in my life.  “Once you hit a good one you’ll be hooked,” the friend promised. My first few balls didn’t go anywhere. Then I got one off the ground. The ball flew in the air, fairly straight.

He was right, I was hooked.

I took three lessons to prepare for tryouts, and I was feeling confident. But that all changed when I arrived at the driving range for Day 1 of tryouts. All I saw were girls in their golf clothes, golf shoes and expensive shiny clubs. I looked at myself and what I was wearing: regular shorts, a T-shirt and Converse sneakers, while carrying a golf bag that was bigger than I filled with — what I didn’t know at the time were — men’s blades. Panic and discouragement started to set in, and furthermore I came to find out I didn’t have a clearance card to try out.

I started to cry when the head coach informed all of us that we couldn’t try out unless we had all the necessary paperwork. I ran to my mom crying and told her,“ I want to leave! I can’t try out.” Shortly after a few parents came over to tell me I could try out, and that a few other girls forgot their paperwork as well, but I was reluctant. My mom asked me, “Do you want to play golf?” My response: “Yes.” She said, “Then I’m not taking you home until you do.” So I did.

On the drive home I remember thanking my mom for not letting me quit. I also thought about what the instructor said to me when I showed up to my very first lesson. “Look kid, the first thing I will share with you about golf is that this is a sport that will humble you.”

Day 2 of tryouts was much harder since we were on a golf course. I had never set foot on the green of any course or played a single round of golf. I had no idea what I was doing. I didn’t even know what a tee or a ball marker was! I teed off and the ball only went a few feet in front of me. The coach was getting frustrated, telling me to pick up my ball and take a double par plus 1. I began to cry and started to text my mom from the course asking her to come get me. She texted back: “Do you want to play golf?” My reply was: “Yes.” She immediately texted back, “Then I’m not going to pick you up.” After tryouts my mom drove me to a golf store to trade in my men’s blades for a house brand of clubs that were more suitable for me. The new clubs definitely made a difference in my score. Day 3 I made it on the JV team.

The first season was great! I had fun playing, learned more about the game and made new friends. At the end of the season I received the coach’s award and couldn’t believe that I was worthy. My junior year came around and so did tryouts. This time I actually looked like a junior golfer, and I had managed to purchase my first set of custom-fitted clubs. I made the JV team again, only this season came with some difficulties. There was conflict between my teammates and I, however it didn’t break me down, but only allowed me to get better. I was consistently getting the lowest scores for the majority of the season. I came in first place at a JV golf tournament in which 60 girls competed and I received the player of the year award in this second season. It reminded me that I had what it takes and I was encouraged to continue to press on, even when difficulties present themselves.

After my second season I decided to compete in junior tournaments, and everything changed. I was coming in last place in every tournament I played, shooting my highest scores ever. I was confused because I knew I was capable of doing better. I spent the majority of my weekends crying as I continued to come in last place, not able to shoot anything lower than 100 in one day for any tournament. That’s when I knew it was time for a change. I knew I wasn’t good enough and I needed to get better. I had been working with the same coach for about a year and felt I had plateaued. That’s when I met the founder of Future Champions Golf, Chris Smeal. Almost immediately my game started to improve after working with Chris but the mental part of my game was still off. Once again, I found myself discouraged and shedding many tears in agony because I wasn’t making the progress I wanted. The summer before my senior year I decided to withdraw from a tournament and quit golf for good. The words of my high school coach had been replaying in my head: “Some top players will be showing up to tryouts come next season, Lozano. It’s going to be tough to make the team,” is all I thought about, which discouraged me. My mom reminded me that I could either let others’ words discourage me or empower me. Chris and I decided that instead of quitting I should take a break from tournaments to focus on improving my game.

For the next three months I spent about six days a week at the range and played a couple times a week. I practiced all I could while having two jobs. My summer leading into senior year was about working hard to achieve making the varsity team and getting my varsity letter. Senior year tryouts were intense — and not just for me. This season had brought the most girls I had seen at tryouts, and this year there would be cuts. Luckily I was not one of them. I made the varsity B Team. Although I wanted to make the varsity A Team I had peace and knew this is where God wanted me to be. My last season in high school was the best as I had improved quite a bit, but I still wasn’t where I wanted and knew I could be. Again, the mental part of the game was something I was struggling with as I was working two jobs, practicing a lot, going to school, staying on top of homework and applying to colleges. My social life had gone extinct and I missed it.  After the season ended I didn’t play as much due to my busy schedule. I went to lessons occasionally but I wasn’t as dedicated as I had been in the past. I had lost some of the fire and passion. I was drained from working two jobs but I needed to work as much as I could to pay for lessons, range fees and rounds of golf. The hunt for a college was difficult. I knew that there was a big possibility that I could move out of San Diego, and that was a scary. But the thought of playing collegiate golf was exciting. Unfortunately, many of the college coaches I reached out to gave me the same response: “Your scores are high” and “I already have my team,” or the coaches felt it would be a waste of time to meet.

But one coach did take an interest in me. I visited Regis University in Denver, Colorado, and the meeting went great. We were speaking each other’s golf language. On April 29, 2016, I officially signed to play for Regis. I then saved all my tips from both of my jobs to buy a new set of clubs, as my swing had changed quite a bit since my first set. I got fitted at Callaway Golf Center in Carlsbad, California, and little by little I bought my clubs a couple at a time, until I had a new set. Then it was crunch time. I was on fire again and my passion was greater than ever. I practiced every day until a couple days before heading to college. I took two or three lessons a week, hit the range daily and was on the greens at least twice a week. I also had the privilege of working tournaments and camps for Future Champions Golf, which was an amazing experience! So here I am, officially a college student-athlete and I couldn’t be happier. 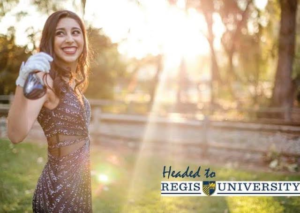 As I look back at my journey I see how hard work, dedication, passion and, in my case, faith helped me achieve my dreams. The odds were against me. I never thought I would accomplish what I had. I am at an amazing university playing the sport I fell in love with. I also received multiple scholarships and grants, which helps my mom and I tremendously! I hope that in sharing my story it will encourage young athletes to press on and to never give up on their dreams. To the young athletes out there, don’t knock yourselves down. We are our biggest critics as human beings, and golf can easily make you extra critical and hard on yourself.  And like my mom always shared with me, you can let others’ words discourage you or empower you. When I brought up college golf early on, I was told not to get ahead of myself because I was a late bloomer and that I shouldn’t get my hopes up. The reality is that you are the only person who can prevent yourself from accomplishing your dreams. It will take hard work, dedication and at times sacrifices but it will be worth it. Trust me, I lived it.

A special thanks to my Heavenly Father, God, for giving me the passion and talent to play this wonderful sport. Thank you to my mom for being my biggest supporter, my No. 1 fan throughout my journey and for never giving up on me even when I wanted give up on myself. Thank you to Ed Harris PGA for being my first coach and teaching me the basics. Last but certainly not least, THANK YOU Chris Smeal for pushing me the hardest, being honest with me, for believing in me and helping me shave 30-plus strokes off my game. I am so proud and happy to say that you were and are my coach! 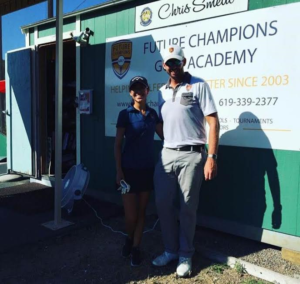 1 thought on “Pursuit of Golf”