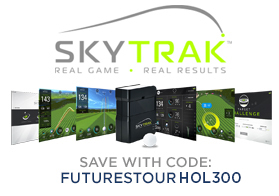 Future Champions Golf is thrilled to announce that SkyTrak Golf has become the Title Sponsor of the FCG Western States Cup. The new tournament name will be the FCG SkyTrak Western States Cup and will take place on President’s Weekend February 17-19, 2018!  Past Champions include some of the best former Junior Golfers in the Western USA and these past champions have gone on to do amazing things in Collegiate Golf!

You can purchase a SkyTrak System now before December 31, 2017 and receive over $500 off using code “FUTURESTOURHOL300” online at www.skytrakpromo.com/futurestour/