This past weekend the Step-Up Tour played Twin Oaks Golf Course. Fairways at Twin Oaks can be narrow and test golfers’ accuracy off the tee. Keep your drives out of the rough, and you’ll be rewarded with ample opportunities to hit the green in regulation. You’ll also find the greens to be quick and true: Read your putt correctly and your ball will find the hole.  Let’s see how they did:

First up for the Boys college prep division we had Hayden Knutson come in first with a score of 78, and there was a two person tie for second place at 86 between Logan Rethmeier & Julian Madrigal. Ties are determined by back nine low, so winning that card-off taking home second place was Rethmeier ad Madrigal took home third.

For the Girls college prep division, we had lone soldier Eden Monica shoot 85 for her trophy.

For the Boys 13-14 division, we had a two-way tie for first place which results in a sudden death playoff for the trophy! The tie was at 2-under 70 between Jaden Hunter and Timothy Jung with Hunter coming out on top. Taking home the third place trophy was Caden Flores with a score of 76. 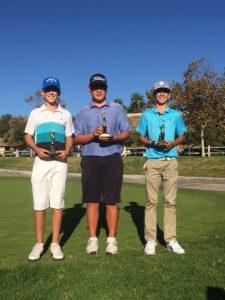 For the Girls 13-14 division, we had another lone soldier Jiya Dalal shoot 80 for her trophy. 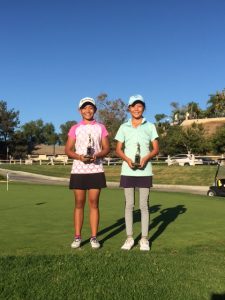 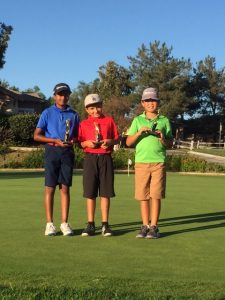 Big thank you to all participants, parents and the staff at Twin Oaks Golf Course for hosting us. Until next time Step-Up Tour… Tournament Schedule