Future Champions Golf was excited to host yet another installment of the quickly growing Step up Tour. Riverwalk Golf Club was a great venue to play on sunday morning, five different age categories took on the golf course that is highlighted by generous fairways and big undulating greens. Let’s see how some of the golfers fared this weekend with the great scoring conditions. 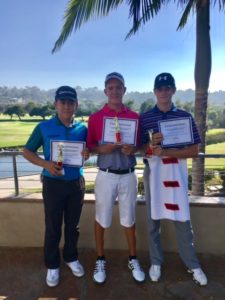 The boys college prep division has been getting better and better competition as we are entering the final stretch of the year. Andy Hegan put a 74 on the board, a solid round which included two birdies and gave him first place honors for the day. Ryan Bao highlighted his round with a great eagle at the par five twelfth en route to shooting a solid 78 which was good enough to take home second place honors. Steven Scheider had tons of birdie opportunities on Sunday but just couldn’t find the bottom of the cup he takes home third place with a solid 80. Great job guys! 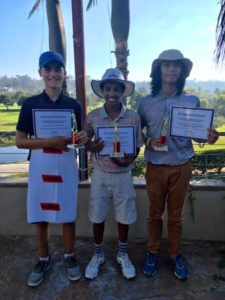 The boys 13-14 year old division has been getting more and more participants throughout the year and nine players teed off on Sunday with hopes of capturing that coveted first place trophy. Nikko De Castro and Umaan Awari both played splendidly and ended up tied for first with a score a of 79. A tiebreaker was needed to determine a winner and it was Umaan Awari  who would claim the top prize for the day leaving Nikko De Castro with second. Ethan Weissman had a couple of birdies on the front nine but just couldn’t find a rhythm on the back nine and ended up in third place with a score of 81. 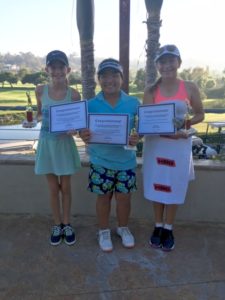 The lone girls division of 14 and under were excited to tee off with a 6 girl field. Two groups went out on Sunday morning with the hope of capturing that elusive first place. Karen Tsuru shot lights out on the front nine carding a one under 35 and finishing the day at two over 74 which was good enough to place her in first. Kristian Wilmes did a great job of playing under pressure and took home a second place finish with a score of 90. Sofina Firouzi carded a birdie on the tough par four third en route to shooting a 92 and solid third place finish. Great job girls! 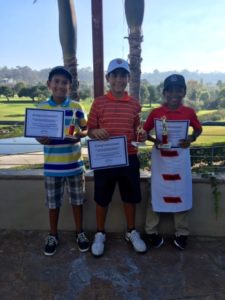 The boys 11-12 year old division had a field of five players who were all ready to test their skills against a long golf course. Jacob Paule had an interesting front nine that included three birdies which catapulted him to the top after shooting a solid 76. Armando Castillo found some pars on the front nine but couldn’t manage to find a rhythm on the back nine and ended up in second place with a score of 92. Elijah Goulbourne was right behind Armando Castillo for most of the day and he carded in two pars on the front nine en route to finishing in third place with a round of 96. 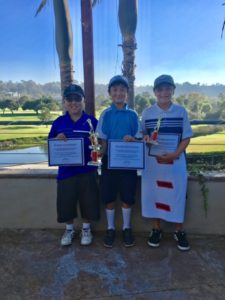 The boys 10 and under division had six players eagerly waiting their turn to tackle the golf course and none was more eager than Colin Li. Coming off a great showing at Colina Park, Colin racked up two birdies en route to a 79 and first place honors for the day. Ethan Hong did a fantastic job of keeping up with the Colin all day and just fell two shots short of winning but gathered up a nice second place finish. Ethan Keusch carded a birdie on the par five seventh hole en route to a solid 85 and a third place finish.