Future Champions Golf made their way just north-east of San Diego this weekend up to Temecula and played The Legends Golf Club on Saturday, February 4th. Junior Golfers from all over the Southern California area flocked to this event as it was a World Championship Qualifier! The boys had the option of playing in 4 different age categories while the girls had the opportunity to sign up for 3 different age groups. The sun made an appearance here & there but was cloudy most of the day. Let’s see how they did:

The Boys College-Prep division had quite a few new faces, as they jumped on the opportunity for this World Series Qualifier! There was a tie for 1st place which saw Felix Tsui from Pomona, Ca and Kotaro Noda from Japan duel it out in a two hole play-off for first which resulted in Felix Tsui taking home first place, but both boys qualifying for the FCG World Championship! 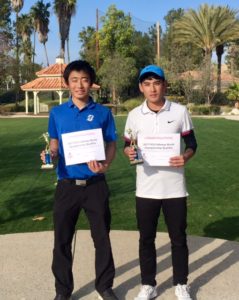 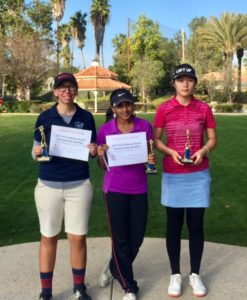 The boys 13-14 division only had two players this time, both qualifying for the World Championship! Nikko De Castro of National City, Ca finished his round with a birdie to shoot 80 for first and Tyler Kowack shot 91 taking home second place to San Diego. 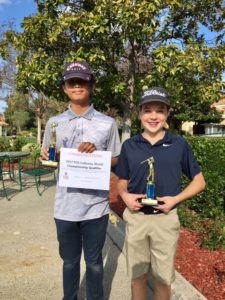 The girls 13-14 division had a few more girls competing, with Ruhee Pandit of San Diego starting her rounding with a birdie, and shooting 6-over, 78 for first. Second place was awarded to Tayler Muchmore all the way from Yucaipa, Ca shooting 80 and both girls qualifying for the World Championship. Diane Tang of San Diego took him third shooting 88. 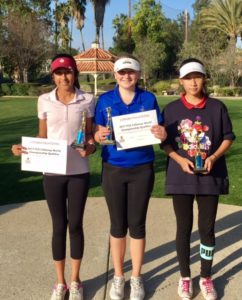 The boys 11-12 division played the red tees with Eddie Ren of La Habra Heights, Ca posting two birdies to shoot 3-over 75 for first place and from San Marino, Ca was Ryan Toh whom shot 90 to take home second. Both boys qualified for the World Championship. Max Atkins of San Clemente finished his round with a birdie and shot 97 for third place. 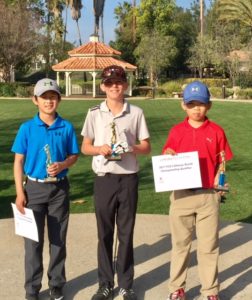 The girls 12-under division had a new face, Ashley Kim from Buena Park, Ca post an astounding 6 birdies to end at 2-over 74 for first place and Kristian Wilmes of Carlsbad, Ca shoot 86 for second and both girls qualifying for the World Championship. Muzi Wei of San Diego shot 89 for third place. 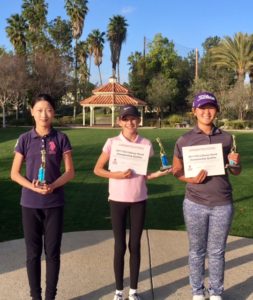 And rounding out the tournament is the boys 10-under division. Taking home first place is Jaiden Davis of Chula Vista, Ca who shot 90 and Kai Salinas of San Diego with 93 for second of which both boys qualified for the World Championship. However, Jaiden already qualified from a previous event so that gave our third place finisher, Srinesh Namburi of San Diego a spot in the World Championship! 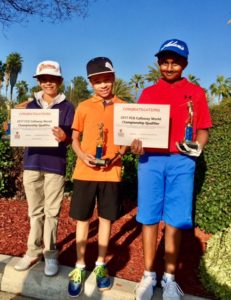 Future Champions Golf is excited for the 2017 season, so far we have had great tournaments filled with emotion and excitement. We are very excited to be offering more than 100 events a year that allow junior golfers to train and showcase their talent on the links. We are working very hard on developing more opportunities for Junior Golfers to showcase their talent in front of College Coaches in order to open the door to amazing possibilities. Tournament Schedule