This past weekend Future Champions Golf held one of our rather popular SD World Series events. This one was even more special as our participants were able to play both courses on the prestigious property. Tee times the first day on the Champions course and split tee the second day (Boys 15-18 off hole 10 and all other divisions off hole 1) on the Legends course. The golf courses at Omni La Costa, Southern California’s only Gold Medal Golf Resort, are amongst the most storied in California, boasting a rich tournament history (37 PGA events!) and a cadre of prominent guests, ranging from the best professional golfers in the world, to prominent politicians, Hollywood celebrities and legendary sports heroes. La Costa’s tee sheets read like a who’s who: Jack Nicklaus, Gary Player, Phil Mickelson, Tiger Woods and more. Let’s see how they did:

The Boys 15-18 division played a par 72 from the blue tees both days. We had Bo Jin from Encinitas, CA come in first with scores of consecutive 70’s for a total 4-under 140. Coming in second place was Daniel Nunez from Los Angeles, CA with scores of 75 & 69 for a total even-par 144 there was a two-way tie for third place at 1-over 145 between Youssef Guezzale from La Jolla, CA (77, 68) and You Seong Choi from Hacienda Heights, CA (76, 69). Our card-offs are determined by second day low, with Guezzale (not pictured) taking home third and Choi taking home fourth. Coming in fifth place there was a three-way tie at 2-over 146 between Ryan Plodkowski from San Diego, CA (75, 71), Matthew Pennington from Carlsbad, CA (75, 71) and Taehoon Song from Buena Park, CA (72, 74). There was still a tie between two boys so it is then determined by the back nine they played (tied) then last 6 (tied) and final 3; Pennington won this card-off taking home the award. 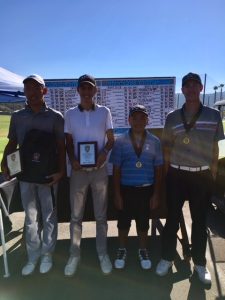 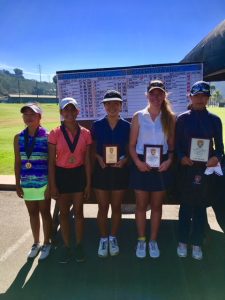 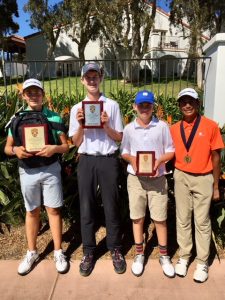 Congratulations to all participants, placers, parents and the staff at Omni La Costa for making yet another successful FCG event! Until next time, FCG followers… Tournament Schedule