Future Champions Golf was thrilled to welcome over 160 players to our 7th annual Skytrak Western State Cup which took place at Menifee Lakes Country Club. This is an special event because it is an 3-day event that takes place over Presidents’ Day weekend and also allowed caddies for players to give them an feel of playing at a PGA or LPGA event. The Boys 15-18 division played the Palms Course all 3-days from the blue tees measuring at 6500 yards. Meanwhile, the Girls 15-18 and also the Boys 12-14 played the white tees at 6100 yards. Then the Girls 12-14 played from the red tees measuring 5400 yards. For the older division of 15-18, the players who make the cut, then played the final day at the Palms course. 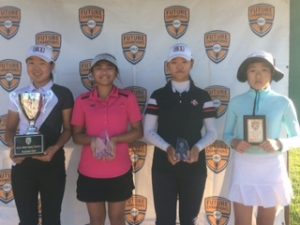 We will start with our Girls 12-14 division who kept it close throughout the tournament. So Young Park from South Korea finished in 5th place carding an 163 for her 2-day total (82,81). Michelle An from Riverside, CA was able to secure her spot for an 4th place finish shooting a total of 161 (78,83). Also from Korea, Eunseo Ryu was able to take home her 3rd place trophy with a total of 158 (78,80). KK Angosta from Henderson, NV was able to gain momentum after her first round by taking home 2nd place with an 146 total score (70,76). However, it was Jungwon Choi that was able to win her division by shooting an total 143 (73,70) for her to capture 1st place. 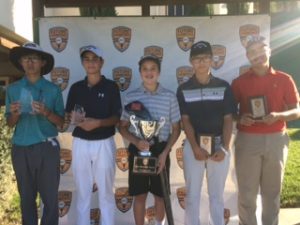 Our Boys 12-14 division was able to keep it close over the weekend in which both Nathan Sampson from Temecula and Gyutae Bak from Murrieta both tied for 4th place shooting a total of 149. How FCG breaks ties in the lowest back 9 total, so in 5th place is Nathan Sampson (71,78). Gyutae Bak shot an solid round of 69 for his final day to capture the solo 4th place award (80,69). Inigo Izuzquiza from Cornado, CA was able to capture his 3rd place trophy shooting a total of 147 (67,80). From Riverside, CA Kevin An took home 2nd place shooting an total of 143 (69,74). Tyler Kowack from San Diego was able to take home the 1st place trophy after shooting an solid performance total of 140 (72,68). 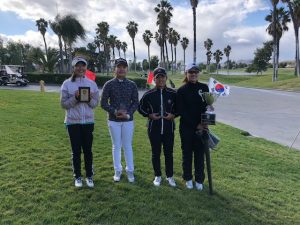 Our Girls 15-18 division set out to break FCG records with Dason Ma shot an FCG Girls record low shooting 62 which included an Hole-in-One! From San Diego, Dianna Lee and from Encinitas, CA, Jiarui (Joyce) Jin both tied for a combined 3-day total of 222. FCG rules and regulations state that the lowest back 9 total for the final day breaks the tie. With that in mind, Dianna Lee took home the 5th place trophy (70,75,77), while Jiarui Jin placed 4th (75,71,76). Our 3rd place finisher from Korea is Hyun Jo Yoo shooting an combined 3-day total of 221 (71,69,81). Our Top 2 finishers both played an amazing rounds which both of them shot in the low 60s, which set an FCG record, we want to congratulate these ladies for their amazing scores the past 3 days. From Canada and coming in 2nd place is Euna Han shooting a total of 206 (63,66,77). Dasom Ma from Korea was able to put herself in contention after her record breaking 62 which lead her to an 1st place victory with an total of 205 (70,62,73). 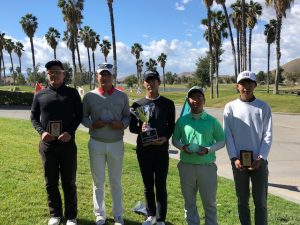 The Boys 15-18 division was able to overcome the tough conditions of the final round to help them place in the Top 5. Coming in 4th place from Encinitas, CA is Gun II Moon with an total of 218 (70,76,72). Both Heesung Park from Murrieta and Heetae Park from Korea tied for 3rd place with a total of 216. However, FCG rules and regulations when it comes to breaking ties is the final back 9 low score. Heesung Park is taking home the 4th place trophy (70,66,80) and Heetae Park will be placed in 3rd for total (72,63,81). Coming from Las Vegas, NV is Yuki Moriyama took home 2nd place with his total score of 212 (72,67,73). However, it was Kang Ho Cha from Korea putting on a solid performance which captured his victory with an combined total of 210 (66,72,72). 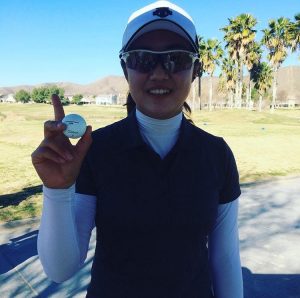 We want to give a special Shoutout to Dasom Ma who got an Hole-in-One during Round 2 during our FCG Western States Cup! This helped her as she went on to shoot an FCG record low of 62 and capture an 1st place victory!

*This event is included in the FCG World Series Ranking*