Last weekend the FCG tour had our Annual Memorial Day Championship! Played on two courses this year, we saw a lot of awesome golf! First, the boys played on the newest course at PGA WEST and the only Greg Norman-designed golf course in the Coachella Valley is aptly described as being very “challenging but fair.” Sporting only 68 acres of lush manicured turf, 102 white crushed marble bunkers and shark blue water coming into play on 9 holes, this 7,200-yard course offers a truly “Outback” experience that will entice you back time and time again. The girls were over at La Quinta playing the Mountain Course; famed for its unique Pete Dye design, playability and stunning visuals, this ultra-challenging course features pot bunkers and rock formations, as well as incredible elevations of tee boxes and well-bunkered greens. Ascending to the top of the elevated tee box of the signature 16th enables you to fully appreciate the majesty of this course, named one of Golf Magazine’s Top 100 You Can Play. An extra special treat for this tournament: all players got to ride in a cart! Of course, another qualifying event for our prestigious FCG Callaway World Championship, back out in the desert in July. Let’s see how they did:

First up for the boys 15-18 division, playing the championship tees at PGA West, we had a tie at 2-over 146 between John Kim from Palm Desert, Ca & Bo Jin from Encinitas, Ca. After a sudden death play-off, Bo Jin took home first. Not pictured, coming in third place was Christopher Wardrup from Imperial, CA with scores of 72-75 for a total 147. Fourth place went to Cameron Xiao from Yorba Linda, CA with scores of 72-77 for a total 149 and fifth place had a three-way tie at 151 between Eric Cho from Murrieta, CA (74-77), Jess Scheller from Valencia, CA (76-75) and winning that card-off was Luke Potter from Eincinitas, CA with scores of 77-74. 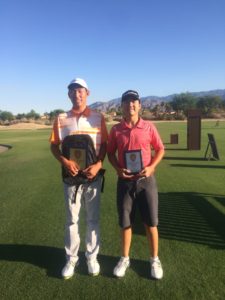 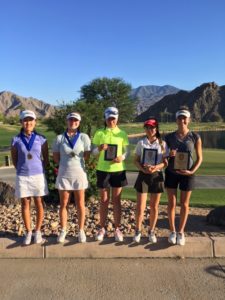 The boys 13-14 division played the regular tees at the Norman course, with another first place tie! At a total 153, a sudden-death play-off between Ethen Yen from Azusa, CA & Andrew Garcia from Pico Rivera, CA ensued. Coming out on top was Ethen (75-78) and Andrew (76-77) taking home second. We had another tie for third place, at 168 with Benjamin Gould from Carlsbad, CA winning the card-off with scores 87-81 and taking home fourth was Billy Lee from Murrieta, CA with scores of 85-83. 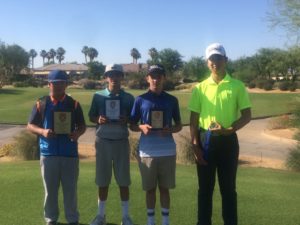 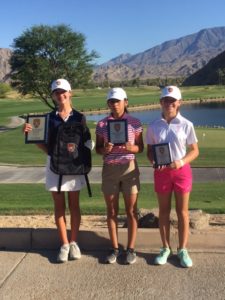 Back at the Norman Course, the 11-12 boy played the red tees with lone soldier Maclain Brigham  from Menifee, CA shoot 97-95 for a total 192 for his trophy. 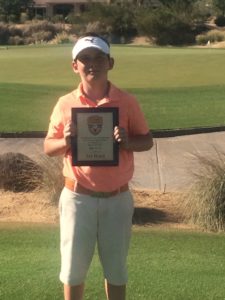 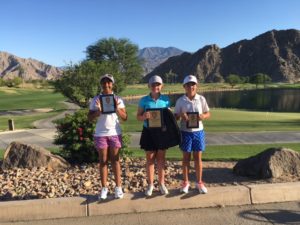 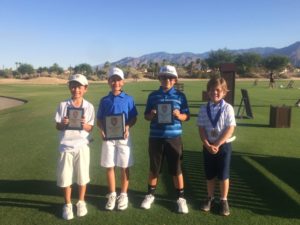 And last but not least, our littlest lady (not pictured) 9-10 winner Karina Jadhav with consecutive 99’s for her trophy!

Big congratulations to all placers in this wonderful event! Thank you to all participants, players, parents, caddies and of course the wonderful staff at both PGA West and La Quinta courses. Another awesome event in the books for Future Champions Golf! Until next time FCG Tour… Tournament Schedule