This past weekend we had our 8th Annual FCG Las Vegas Championship! This year’s event had some of the best weather we have ever had! Held at the beautiful Tom Fazio designed Primm Valley Golf Club on the state border of CA/ NV, located just 30-Minutes from the Las Vegas strip. We took over the whole facility as players were on both the Desert and Lakes Courses for 36 holes of fantastic golf. This event earns points in the FCG Callaway World Series Ranking and an open qualifier for IMG Junior World with the winner of each age division earning an exemption into the 2017 Event. Let’s check out these results:

First up, for the girls 15-18 division, we had some outstanding play this past weekend on the Lakes Course playing a par 71 from the white tees. First mention, would be 1 of 3 hole-in-one’s that occurred! On the second day, on hole 17, Madison Walker from Bermuda Dunes, CA scored an ace! For our top finishers, taking the title this year was Morgan Goldstein from Las Vegas, NV with a first round 6 under, second round 4 under with an total 10 under. In second place, we had Annick Hackiewicz also from Las Vegas shoot 67-68 for a total of 7 under, 135. In third place, we had a tie at even par 142, and in determining a tie break we do a card-off with second day low and wining that card-off was Hunter Pate also from Las Vegas, NV shooting 72-70. Taking home the fourth place trophy was Yoonju Shin from Irvine, CA with scores of consecutive 71-71. And rounding out the top finishers for girls 15-18 division was another tie at 1-over 143 and Sydney Smith from Las Vegas, NV taking home the trophy. 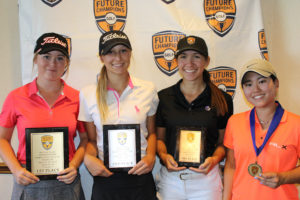 With the boys 15-18 division comes our second hole-in-one from the event! Playing the blue tees on the Desert Course, Canon Olkowski from Grand Junction, CO made a hole-in-one on the 4th hole on the second day! Now for our top finishers: Cole Ponich from Farmington, UT shot first day 6-under 69, second day 3-under for a total 9-under 135 to take home the title this year. Coming in second place one-stroke back shooting 70-66 for a total 136, and in third was Michael Sun from Camarillo, CA shooting consecutive 69’s for a total 138. Fourth place had a tie between two brothers who totaled at 139 – with our hole-in-oner taking home the fourth place trophy shooting 71-68 and then brother Trevor Olkowski shooting 7-69 for fifth place. 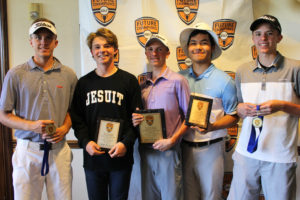 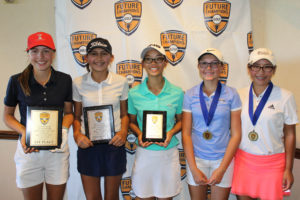 The 13-14 boys played the white tees on the Desert Course. With both top finishers shooting the same score both days, 71-70 ending at a total of 3 under 141… also came a two hole sudden death play-off! Coming out on top was Ryan Voois from Ladera Ranch, CA and taking home second was Benjamin Hong from Brea, CA. We had another tie for third place with both players ending at 142. Our card-off’s are determined by second day low and Dylan McDermott from Granite Bay, CA shot 73-69 to win the card-off and Aiden Goldstein from Las Vegas, NV shot consecutive 71’s to take home fourth. And fifth place went to 1-under 143 and a tie between three players: Kyle An from Aliso Viejo, CA, Gregory Lee from San Jose, CA, and taking home the medal was Freddy Sun from Richmond, BC. 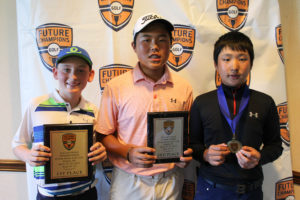 The girls 11-12 division played the green tees on the Lakes Course and had Jeanne Bravo Padillo from Glendale, CA shoot 74-71 for a total 145 for first. In second was Celine Ho from San Jose, CA shooting 81-72 for a total 153. Third place we had a tie at 156 with Avery Zweig from McKinney, TX shooting 81-75 to take home the trophy and Vani Karimanal from San Jose, CA shooting 79-77 for fourth place. In fifth place we had another tie between Michelle Liu from Vancouver, BC and Lauren Kolodziej from Placentia, CA at 157 with Lauren taking home the medal. 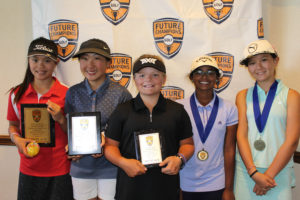 The boys 11-12 division played a mix of white and green tees on the Lakes course wth Hogan Park from Walnut, CA shooting 69-70 for a total 139 for first. Another card-off for second place at 142 with Ethan Yen from Azusa, Ca shooting consecutive 71’s for his trophy and coming in third was Connor Williams from Escondido, CA who shot 70-72 for a total 142. Another card-off for fourth place at 143 with Cayden Pope from Lexington, KY shooting 74-69 to take home the medal and coming in fifth was Mason Snyder from Las Vegas, NV shooting 72-71. 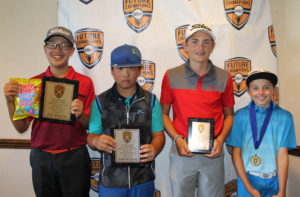 The girls 9-10 division played their own special tees on the back nine of the Desert Course each day with Yana Wilson from Henderson, NV shooting 36-33 for a total of 3 under 69 for first. Coming in second place was Brynn Kort from Kingman, AZ who shot 37-38 for a total 75. We had a tie for third place with both girls shooting total of 78, but Kalyn Doss from Litchfield Park, AZ shooting consecutive 39’s for her trophy and Elise Liu from Richmond, BC shooting 38-40 for her medal. Fifth place had a tie at 88 between Jayne Sung from La Habra Heights, CA (41-47) and Katherine Keith from Alamo, CA (42-46) with Katherine taking home the medal. 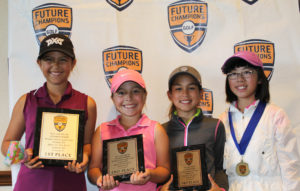 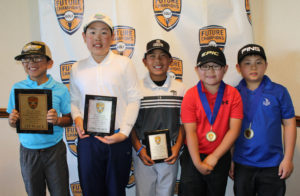 The girls 8-under division played their own special tees on the back nine of the Desert Course both days with Zoe Salinas from San Diego, CA shooting 41-36 for a total 77 coming in first, second went to Emma Molina from La Mesa, CA shooting 40-45 total 85 and in third place went to Skylar Earle from Temecula, CA who shot 47-50 for a total 97. 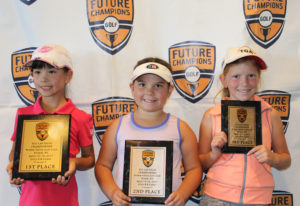 And lastly for the boys 8-under division who also played their own special set of tees on the back nine of the Desert Course both days saw Sebastian Glen from Temecula, CA shoot 37-43 for a total of 80 for first and in second was Connor Szczechowicz from Chula Vista, CA who shot consecutive 42’s to end at 84. 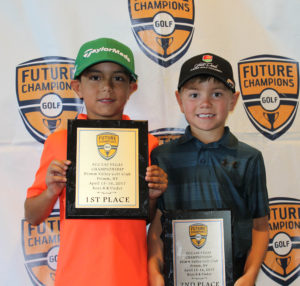 Future Champions Golf would like to give big shout-out to all the players, parents and families for coming out to Primm Valley Golf Club and hanging with us on Easter Weekend! Special thanks to the staff at Primm Valley GC for helping us host another amazing event! Until next year’s annual Las Vegas Championship…