Future Champions Golf held another event of their World Series Tour in Santa Barbara, California over the Halloween weekend. Players from all over the world were excited to be able to play Sandpiper, a beautiful golf course so close to the pacific that you can taste the ocean breeze. It’s no wonder this golf tournament has a full field every time. The weather seemed to be in good spirits on the first day of competition and players arrived on the tee eager to get the tournament under way. 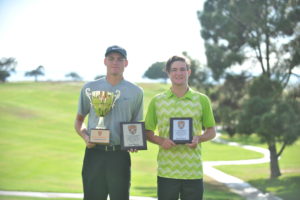 The boys 15-18 age division had a 59 player field register for the event making a top ten finish a great tournament for any player. Max Brenchley of Alpine, Utah had a weekend to remember, with 8 birdies for two days and minimizing his mistakes he was able to put together rounds of 71 and 73 to shoot a total of 144 (E) for the tournament and a spot at prestigious Aaron Baddeley International the first week of December. Congratulations Max! Joe Vrzich of El Cajon, California has been on a hot streak of late and this week was no different, piecing together rounds of 71 and 76 which was good enough to take home second place. Zihao Jin of El Cajon, California goes home with third place for the weekend but also goes home with the low round of the tournament shooting a 69 on the second day. 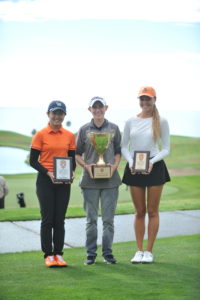 The girls 15-18 age division had a 19 player field come out and try to capture a coveted spot for the Aaron Baddeley Invitational. The girls seemed inspired to partake in the tournament and none more than Maddie White from Lompoc, California who was a beacon of consistent solid play with rounds of 74 and 72 she was able to squeak by the competition and take home first place by one stroke. Congratulations on your spot at the Aaron Baddeley Invitational Maddie! Kornkamol Sukaree of Huntington Beach, California had 8 birdies over the weekend ended up one shot shy of the leader and took home a solid second place. Clair Hogle of Escondido, California has been quite an inspiration these past couple of weeks adding to her recent domination with a top three in this event after rounds of 77 and 75. Great going girls! 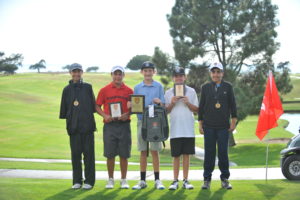 The boys 13-14 year old division had a great time trying to tackle such an amazing golf course. Nobody had a better time than Robert Keilch from Newport Beach, California who closed off his tournament with a majestic hole in one which catapulted him to a first place finish. Aidan Goldstein of Las Vegas, Nevada shot an opening round 77 he fought back from a tough three hole stretch on Sunday to take home a solid place. Jack Townsend had three birdies over the the weekend and ended up with a third place finish after rounds of 78 and 83.

The Santa Barbara Championship is always a pleasure to host and it would not be possible without the time and commitment from all the volunteers and staff members. Future Champions Golf would like to also thank the parents of these junior golfers who take the time from their busy lives to attend our events in order for their child to get the best competition possible in his/her junior golf career. Don’t forget to check out our website and schedule for more possibilities to better your game with our year long tournaments.

Also to check out some of pictures taken of the action over at Santa Barbara check out this link :

Future Champions Golf has some exciting new for the winners of this event! Please click on the link for more information about your entry into the 2017 FCG Callaway World Championship.

Who has qualified for the 2017 FCG Callaway World Championship