Future Champions Golf continued the KBS Tour 1-Day Series this weekend at Riverwalk Golf Club as players have an opportunity to qualify for the KBS Championship in June. KBS events are able to provide an opportunity for all age divisions to play in an competitive 1-Day event at Executive and private courses. Riverwalk brings an unique challenge as the course has three different 9 hole layout which brings an challenge to its players. During this weekend all players played the Presidio and Mission course which brought low scores and the weather conditions held up very nicely for players. As KBS sponsors all our special 1-Day Series events which also includes players that finish in the Top 2 of their division they each get an KBS Towel! Also, each winner of their division will earn an spot in the 1-Day Series Spring Championship that will be held in June. The course set up played from either the Forward or Middle tees with an par of 72. Our Boys 9-10, Boys 11-12, Girls 12 & Under, Girls 13-14, and Girls College Prep played from the Forward tees playing from 5,427 yards. While our remaining age divisions of Boys 13-14 and Boys College Prep played from the Middl tees measuring to 6,156 yards. 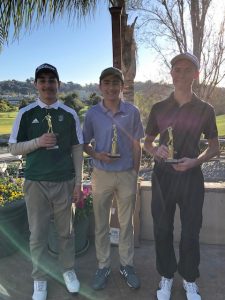 We will start with our Boys College Prep as both Aiden Johnson from La Jolla, CA and also Andrew Craig from El Cajon, CA both shot an round of 97 and tied for 2nd place. FCG Rules and Regulations breaks any and all tie breakers with either an playoff or an card off. In this event, it is Andrew Craig coming in 3rd place and Aiden Johnson placing in 2nd. Also from El Cajon is Anthony Konja who shot an 91 in his round which sent him home with his 1st place trophy. 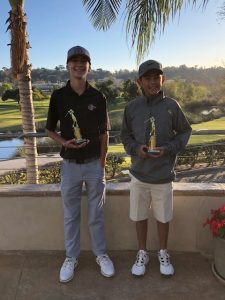 Our Boys 13-14 division was an battle of Temecula and Murrieta. As Chayce Frye from Murrieta shot an 91 in his round to get him his 2nd place trophy. However, the Temecula native, Caden Flores won his division by carding an solid performance of 82. 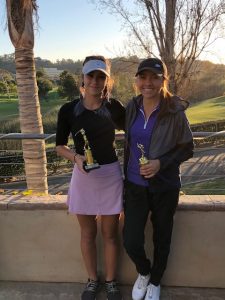 The Girls College Prep division was an field of all Sa Diego natives! Frankie Garcia and Brea Tyrus were able to keep it close down the stretch of the final holes at Riverwalk. Brea Tyrus shot an solid round of 84, while Frankie Garcia was able to hold on to her lead shooting an round of 82 and the 1st place trophy. 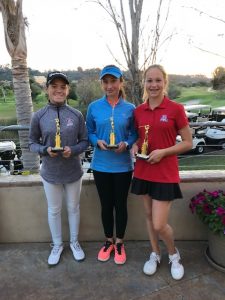 Our Girls 13-14 division was able to make the most of the challenging conditions at Riverwalk. From Ladera Ranch, Skylar Hughes carded an 107 in her round to place her in 3rd overall. As La Mesa native, Carissa Freeman continued her FCG tournament streak which landed her in 2nd place with an round of 106. Winning the overall division is Isabella Hernandez from Chula Vista shooting an round of 102. 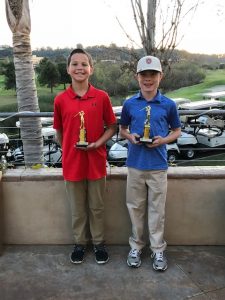 Going back to the Boys division with the age group of 11-12 is Ridge Hughes and Ryan McCormick were able to handle the course conditions and take advance of the beautiful weather this weekend. From San Diego and coming in 2nd place is Ryan McCormick carding an 100 in his round. As from Ladera Ranch born, Ridge Hughes is able to go home a winner with carding an solid performance of 82. 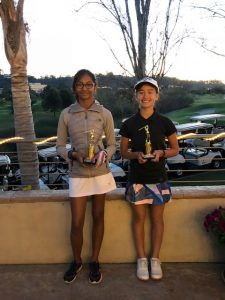 The final Girls division is the 12 & Under group which had players from Carlsbad and also San Diego. In 2nd place is Avni Kalia carding an round of 107. While Andee Avery will go home with her 1st victory with an round of 82. 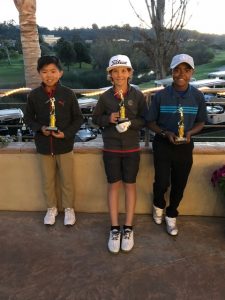 The final Boys division which is the Boys 10 and Under was an field of all San Diego participants! Coming in 3rd place, with a score of 96 is Lavella Teague. With an round of 95 and 2nd place is Lance Lau. While Dale Swartwood won his division with an round of 84.

Future Champions wants to thank all the participants who competed this weekend at Riverwalk Golf Course! Also, thank you for our official sponsor of the 1-Day Series, KBS!

We want to congratulate all the top finishers in their age division!