Future Champions Golf visited The Loma Club this past weekend to host another wonderful Kids Tour event. This time we had the pleasure of hosting the Tournament of Champions where an invitation is extended to every kid that won a previous Kids tour event. This tournament always proves to be one of the most exciting golf tournaments throughout the whole year. Let’s see how the kids did. 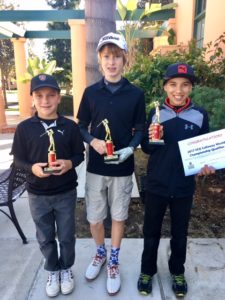 The boys 11-14 year old category saw a great battle between three great players. Nicholas Chavarin used a sweet par on the 9th hole to beat out the competition by one stroke and take home the title of Champion for this tournament. Ryan Marshall and Jacob Hering both ended the day at (+6) and just one shot back of the leader. 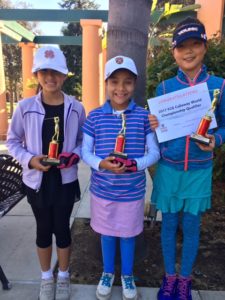 The girls 11-14 year old category had five past champions sign up for the event and the competition was fierce from the get go. Leica Shin was a beacon of consistency and had a birdie on the par 4 5th hole in order to walk away with a victory with a final score of 30(+1). Sofina Firouzi shot a (+9) 36 in order to walk away with second place for the tournament. Breegan O’hearn was just one shot away from tying up second place but a costly double bogey on the ninth hole did not help her intentions. Great tournament girls! 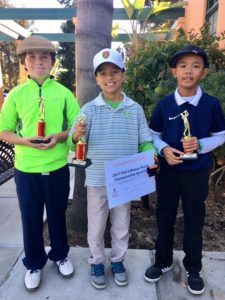 The boys 9-10 age category had three kid battle it out for the title of champion golfer of the year. Jaiden L. Davis seemed to do no wrong on the golf course as he walked in with a solid 37 and took home the coveted trophy. Maclain Brigham ended up just two stroked shy of tying up Jaiden but played some very solid golf to get home with a second place finish. Dylan Giang didn’t have his best stuff out there but played valiantly throughout the nine hole stretch. 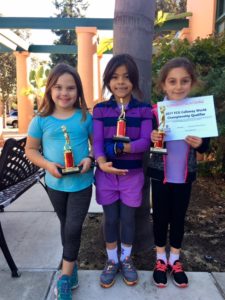 The girls 9-10 age category had three past champions sign up for the event and boy did the fireworks commence right from the start. Sarah Zhao shook off on opening hole bogey and rallied her way to shooting a solid 32 and took home first place for the event. Summer Schafer had a great start to her round but struggled a bit in the middle of her round and came home with a very nice 35 en route to a second place finish. Liliana Ola Davis had a rough time of it out there on the course but a closing par will help anybody on their way home with a third place trophy. 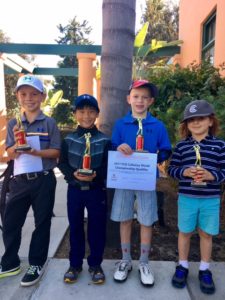 The boys 7-8 age category had two past champions battle it out for first place and boy did they not disappoint. Ty Smock and Jeffrey Kim squared in an unbelievable match on Saturday. In the end Jeffrey Kim ended up just one shot back of the eventual winner Ty Smock. This was a match to remember!

The boys 6 and under category had two past champions battle it out for the ultimate glory. Magnus Schairer and Benjamin Itkin battled it out on Saturday hitting shot after shot in order to determine a winner. Magnus Schairer ended up the day with the victory while Benjamin took home a solid second place finish.

The girls 7-8 age category had three past champions try to go home with the coveted trophy. Isabella Itkin had three pars during the middle of her round which catapulted her to the victory for the day. Emma Molina had two pars on the day en route to shooting 39 and ended up with a solid second place finish. Janette Dunn had a round day at Point Loma but nobody could take that smile of her face when she ended up in third place.

Future Champions Golf would like to wish everybody a Happy Holiday Season. We are very proud to try to help junior golfers develop their skills in our tournaments and academies. It is amazing to see the joy and laughter of every single junior golfer that comes through our organization. Stay tuned for more updates on events and tournaments for the upcoming year.