Summertime is a great season for Future Champions Golf as some of our greatest international events take place during the month of July. The FCG International Jr. Golf Championship was held July 4th through the 8th at Sycuan Golf Resort located in El Cajon, California. After months of preparation and hard work players from all over world arrived ready to showcase their skills at one of the biggest junior golf events of the year. July 4th fireworks were in full effect but they could not compare with the action that was taking place within the golf course, with not a cloud in the sky and no wind to speak of, scoring conditions were at their peak, and did it ever show. 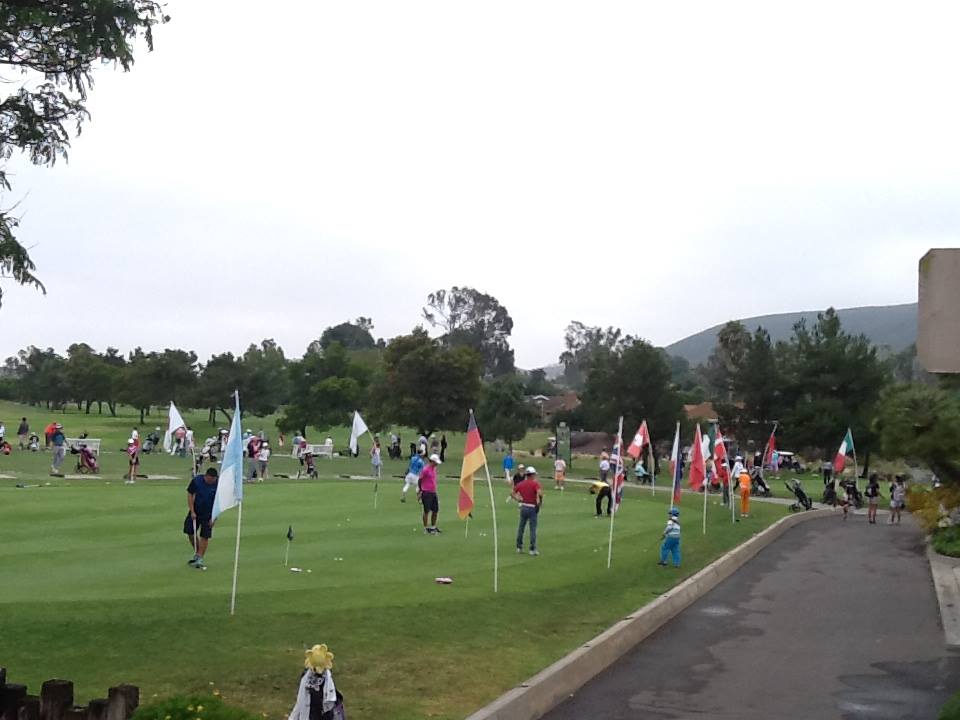 The boys 15-18 division had the task of tackling the Willow Glen Golf course from the blue tees. It was a tough, tight-knit battle the first two days but in the end two players were seen competing for first place, Zihao Jin a local San diego golfer and Parathakorn Suyasri from Chonburi, Thailand. The final day of competition allowed these two golfers to separate themselves from the pack with Suyasri shooting a 65, which would have been good enough to win, if not for Zihao’s masterful 64. Zihao Jin takes home the title of FCG International Champion with scores of 68, 67 and 64 for a three day total of 199 (-11). Parathakorn Suyasri places second with scores of 67,69 and 65 for a three day total of 201 (-9). James Song from Rancho Santa Fe had a great tournament shooting three sub-70 rounds of 69, 67 and 67 for a three day total of 203 (-7) good enough for third place. Rounding up the under par scores for the tournament we find three outstanding golfers Shiryu (Leo) Oyo of Japan, Isaac Noh of Australia and William Mouw of Chino, CA shooting an aggregate score of 209 (-1) good enough to be tied 4th in a field of more than 100 players. 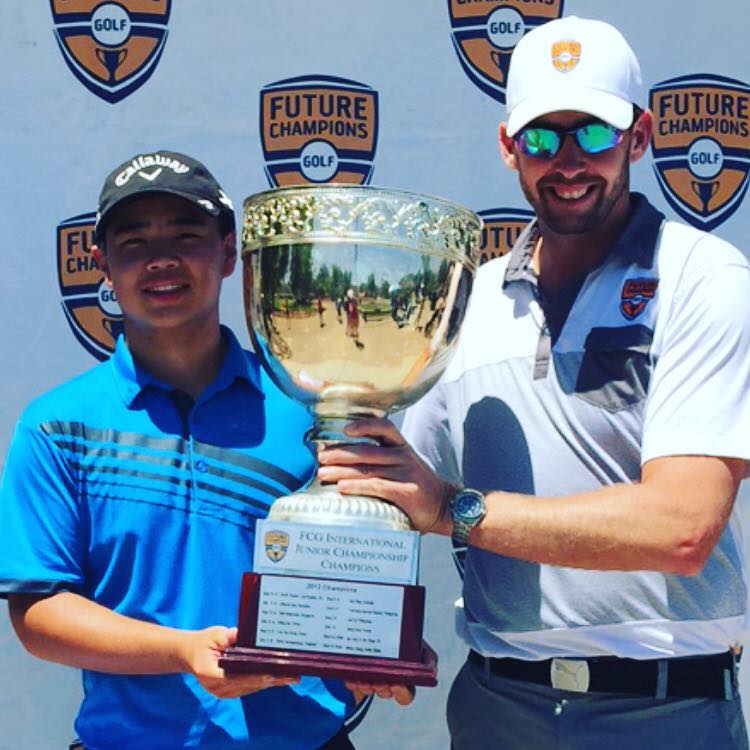 The girls 15-18 division played Oak Glen Golf course from the white tees a tough but fair test of golf that allowed the best junior golfers in the world to showcase their shotmaking abilities as well as their on-course management. None better than Ribka Vania from Indonesia who managed to be the only player under par after three consecutive rounds of 71 for a three day total of 213 (-3). Pauline Beatriz del Rosario and Sofia Chabon, both from the Phillipines, took home second place with a three day total of 218 (+2). While Michela Tjan from Indonesia and April Ranches a local San Diego golfer took home a T-4 finish with a three day total of 220 (+4). 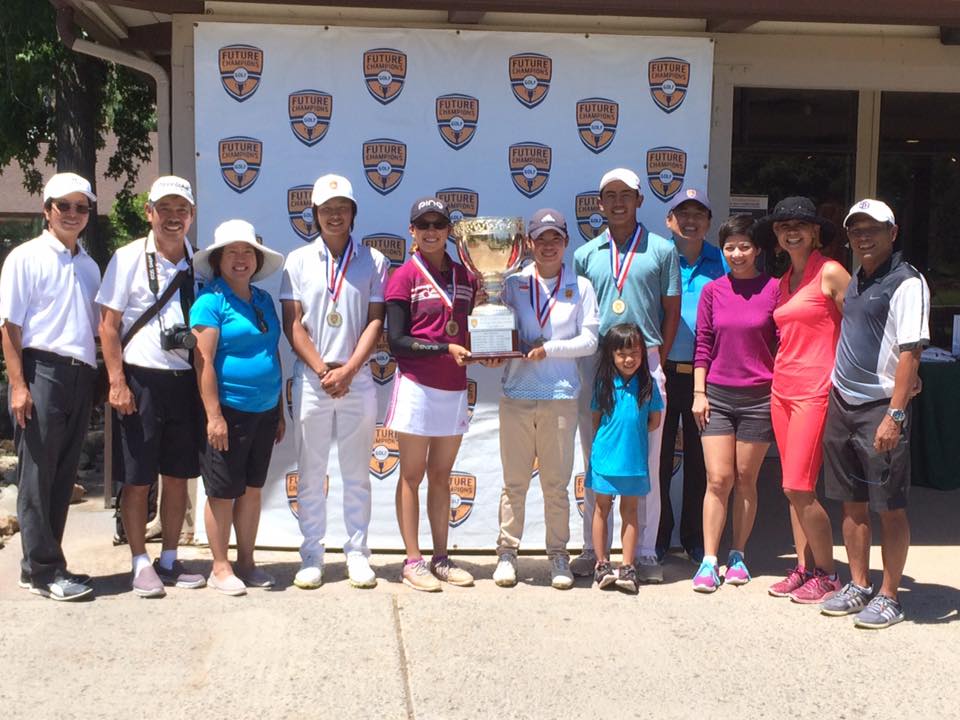 The boys 13-14 age division played out of the Oak Glen Golf course from the white tees which offered a great chance for some of the long hitters to make some birdies and post some fairly low scores. The honor of being called champion came down to two players Robin Williams from England and Napat Vorrasanpisut originally from the Phillipines who both turned in a two day total of 137 (-7) and needed extra holes in order to determine a clear winner. Robin Williams took home the title of International Champion beating Napat Vorrasanpisut in a thrilling battle of playoff holes. Local golfer Caden Fiorini managed to turn in a two day total of 141 shooting rounds of 73 and 68 good enough for a solo 3rd place finish. Mahanth Chirravuri from Chandler, Arizona was a symbol of consistency turning in consecutive rounds of 71 for a two day total 142 (-2) which placed him in a solo 4th place finish. Ryan Plodkowski from Del Mar, California and Aaryomaan Bose of New Delhi managed to turn in a two day total of 144 (E) for the tournament which was good enough for 5th place.

The Girls 13-14 year old division played at the Oak Glen golf course from the red tees where there was a dominant force by the name of Francesca Bernice Olivarez-Ilas who took home the title of International Champion. Her two day total of 138 (-6) was enough for her to win by three strokes. Euna Han of Canada placed second with some consistent play with two rounds under par shooting 71, 70 for a two day total of 141 (-3) followed up by Virginie Ding of Hong Kong whose tournament score of 142 (-2) was enough to take home third place. Fourth place went to Yuen Yuet Selina Li with an aggregate score of 145 (+1) and rounding up the podium at fifth place was Svarin Yuenyong of Thailand with a two day total of 146 (+2).

The boys 11-12 age division had the challenge of tackling St. Mark golf course, a course known for fast, undulating greens and tight fairways, playing from the gold tees, these boys had chance to go low and some took full advantage of the playing conditions. Jayden Ford from New Zealand took home first place with rounds of 69 and 71 for a two day total of 140 (-2) for the tournament. Ian Maspat of the Philippines and local golfer Shea Lague both managed an aggregate score of 141 (-1) good enough to place second in a field of 70 players. Rounding up the tournament were three players, Go Nakatsukasa of San Diego, Ca, Jed Dy of the Phillippines and Ken Shibata of Japan who turned in a two day total of 144 (+2) placing them in a T-4 finish. 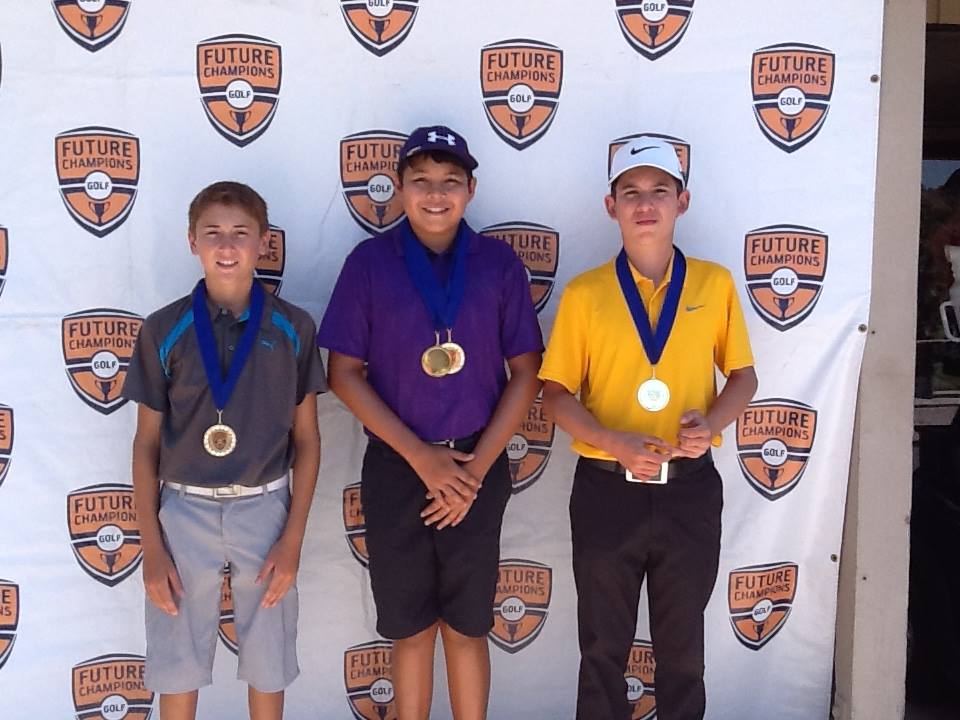 The girls 11-12 age division joined the boys at St. Mark golf course but played from the red tees, this golf course presented quite a challenge to these girls with elevated tee boxes and narrow landing areas this was a true test of patience and endurance. Chia Yen Wu of Taipei City played magnificent golf with scores of 71 and 72 her two day total of 143 was good enough to win 1st place by two shots. Second place was awarded to Cheuk Yee Chloe Chan of Hong Kong whose two day total of 145 (+3) included rounds of 73 and 72. Minny Byun traveled from Florida to capture our third place trophy her aggregate score of 147 (+5) was good enough to place her on the podium. Ting Hsuan Huang of Taipei came in 4th place with a score of 149 (+7) while Chaewon Baek of Langley, British Columbia placed 5th with a score of 152 (+10).

The boys 9-10 age division played over at St. Mark from the red tees, this presented a tough test of golf for these players but three golfers managed to withstand the tough test and come out on top. Jay Leng Jr. a local golfer out of Rancho Sante Fe, California claimed victory with consistency with rounds of 71 and 72 for an aggregate score of 143(+1). Ratchanon Chantananuwat of Thailand shot a great final round 72 in order to help him place second in this division and Phuthanate Kangwol also of Thailand managed to turn in two mid-seventy rounds of 75 and 77 good enough to take third place.

The girls 9-10 age division played out of the St. Mark Executive course from the white tees, there was some good golf being played and the girls seemed to have tons of fun playing this amazing golf course. Pearpylin Chaisilprungruang of Thailand was awarded the title of International Champion with rounds of 61 and 63, a 124 total (+8). Chloris Li of Hong Kong placed second after storming back with a final round 60 (+2) squeeze past the competition. Third place went to Kelly Zhao of Toronto, Canada who shot a magnificent 61(+3) on the final day to take home a trophy.

The always fun but intense competition between the boys 7-8 year old division was player at St. Mark executive golf course from the white tees where the competition came down to a playoff between two outstanding players. Pakorn Wongpen of Bangkok and Connor Herrera of California were tied after a 36 hole score of 127 (+11) and had to go head to head to determine a winner. In the end Pakorn Wongpen took home the coveted trophy while Connor Herrera took home a well deserved second place. Dang Minh Anh of China ended up just one stroke off the lead with two day score of 128(+12) and took home a great third place finish. 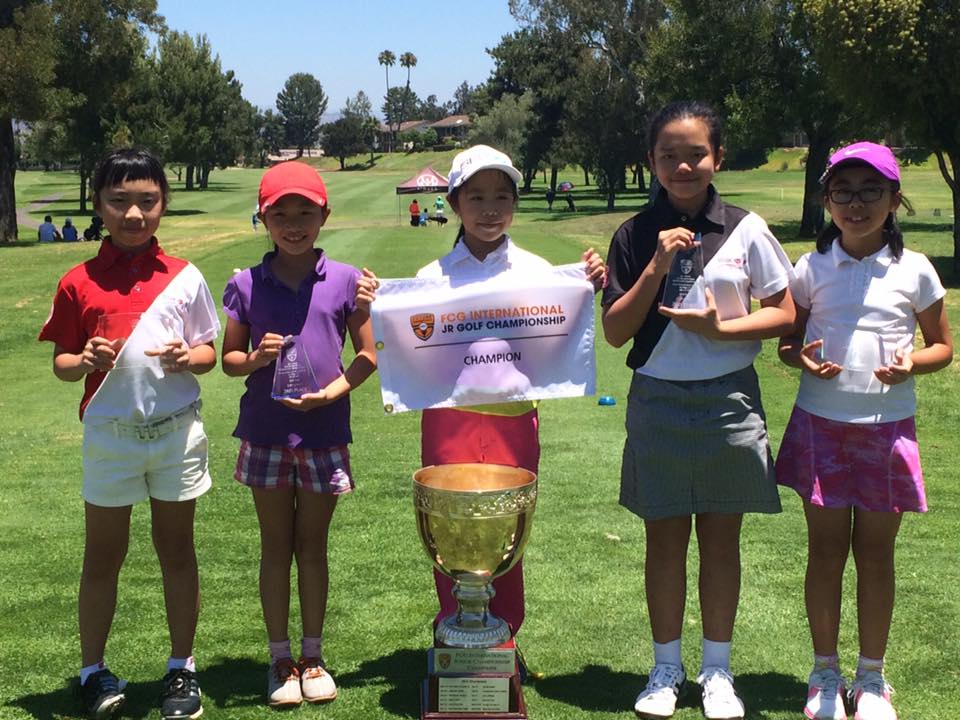 The girls 7-8 year old division was held at St. Mark executive golf course from the red tees, the golf course was in great condition and the girls were in high spirits. None greater than Kayla Geng our first place finisher whose two day total of 126(+10) obliterated the field by 15 strokes. Second place went to Jidapat Siddhirujirot of Thailand with an aggregate score of 141(+25) and third place went to Wing Yee Zoie Chan of China who was able to shoot a two day total of 145(+29).

The boys 6 and under division has been gaining some ground over the past few months and this competition was no exception. Traithunwa Thongsuk of Thailand took home first place with rounds of 75 and 67 at the St. Mark Executive golf course, good enough to win by 7 strokes. Manuel Rubio of Colombia wrapped up second place with an aggregate score of 149(+33) while Enzo Andre Cham of the Phllippines came in third with a two day total of 158(+42). 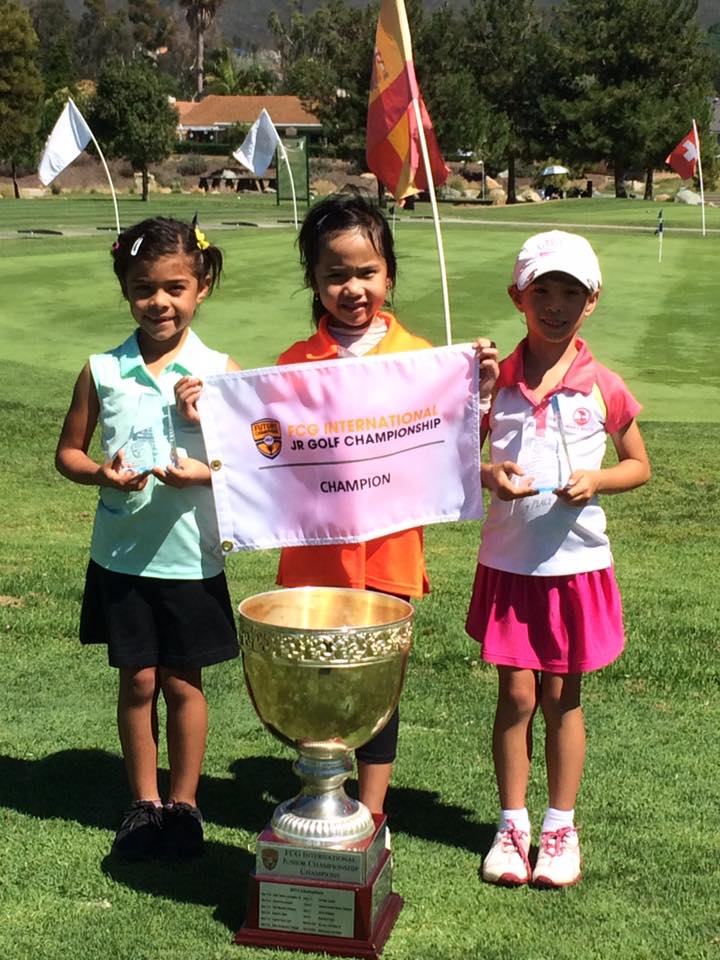 The girls 6 and under division saw three players determined to take home the coveted title of international champion. Arisa Bintachitt of Thailand, Zoe Salinas and Janette Dunn of San diego, faced off in a two day tournament. Arisa Bintachitt arose from the pack with a score of 145 (+29) she managed to hold off Zoe Salinas who ended up only 4 strokes behind the champion with a score of 149(+33). Janette Dunn played valiantly and took home third place for her division. 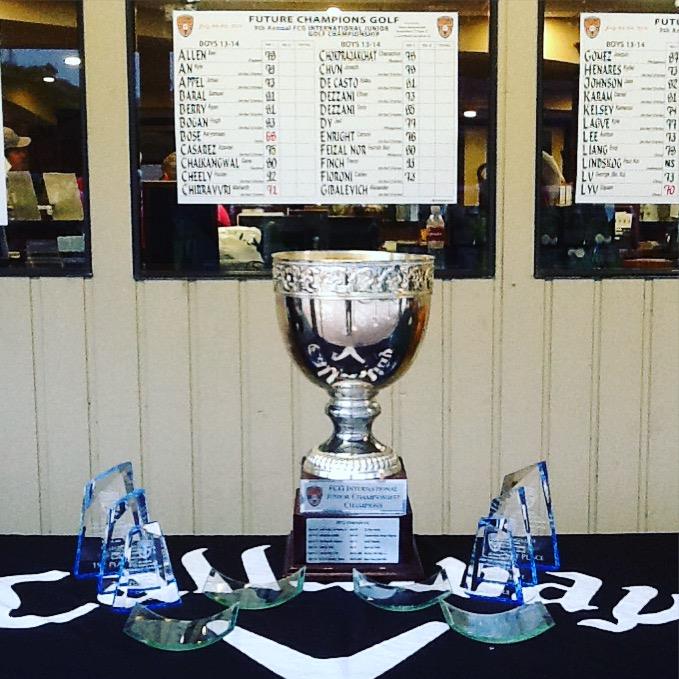 The FCG International Junior Golf Championship is a great event that allows golfers from all over the world come together to not only compete but form friendships that last a lifetime. It is our goal to develop a junior golf community that strives to create a great learning environment all the while allowing kids to grow mentally and technically in this great game of golf. Thank you to all the parents for making the sacrifices necessary in order to have your junior golfers travel such great distances we hope you had as much fun as we did watching such great golf. To all the volunteers and staff members, we appreciate you time and effort in order for our tournaments to run as smoothly as they do. Hope you see you next year! 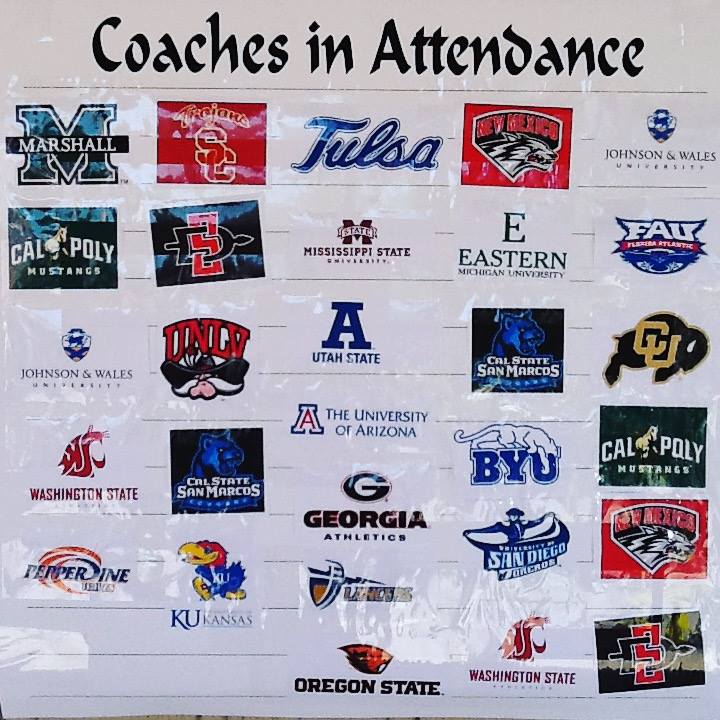