Future Champions took the opportunity of a three day weekend in order to hold a qualifier event at The Legends Golf Club in Temecula, CA. The original layout was the work of Ted Robinson but was later updated by the extraordinary Pete Dye the course presented a tough but fair challenge to the junior golfers that were anxious to get on the grounds. Three age divisions were represented in the tournament, College Prep and 13-14 year olds played two rounds and the 11-10 year olds played one round on saturday. Let’s see who came out on top this week. 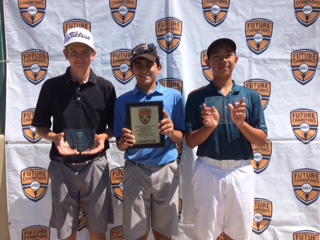 The boys college prep division had a big turnout with 25 players coming out and striving to obtain the first place finish and automatic qualifier into the Aaron Baddeley invitational taking place in La Costa. The scores speak for themselves in this division with more than five golfers hovering around the (+5) mark the champion of this golf tournament needed to shoot under par and Cameron Karam of San Diego, CA did just that, a 142 (-2) with a 70 on day 2 which catapulted him to the top. David Sun of Irvine gave great chase shooting a tournament low 69 but an opening round 76 left him two shots short of first place. Riley Klingelberg was a display of consistency shooting 72 and 73 to share in the second place honors with David Sun. Third place finish goes to Alfonso Franco whose game seems to have a taken a turn for the better in recent events and is now a leaderboard regular on tour. 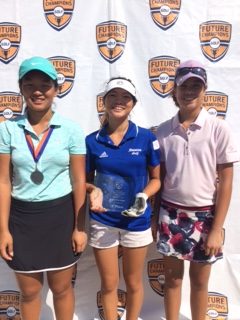 The girls college prep had quite the turnout as well with sixteen players in attendance. The golf course seemed to challenge these girls with tight fairways and elevated greens, distance control was a big necessity to make your way around the golf course. Serena Speresky of Temecula, Ca seemed to be in control of her game on Saturday, shooting a one under par 71 and taking the first round lead. It was tougher to keep on the the second day as her swing wasn’t on target but managed to hang on with a 79 and take home that coveted first place finish. Ellen Choi of Temecula, CA took home second place honors with solid scores of 77 and 77 for a 154 two day total. Rev Lizbeth Alcantara played some solid golf and took home third place with a 157 (+13) score. 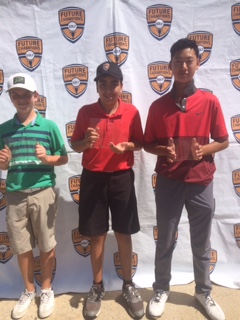 The boys 13-14 age division were ready and up to the challenge of competing in a two day tournament and the inspired play showed up for some of the golfers, none more so than Arman Raghozer who used an inspiring 73 on the final day to come from behind and take the victory. Hugh Bogan and Ashton Lee were your first round leaders both tied at 75 but could not manage to hold off the second round charge of Arman. Hugh finished up at (+11) enough to land him in the second position and Ashton Lee took home a great third place finish. Way to go Arman!

The girls 14 and under division saw a small this week but that’s not to say that the golf was in any way affected. We had a battle at the top with Serena Chi and Summer Yang going toe to toe in the final round to see who came away with the victory. In the end, Serena Chi just simply outlasted Summer Yang and came away with a three stroke victory. Summer Yang took home second place with a combined two day total of 162(+18) for the tournament and Alex Manalang brought home third place with a two day total of 170(+26).

Caden Flores was the lone representative of the boys 11-12 year old division and shot a solid 85 on his way to well representing his age group with some inspired play. 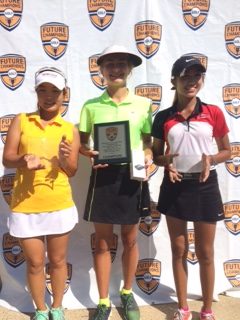 The boys 10 and under division were allowed to play with cart and caddie on Saturday and the sun wasn’t the only thing hot, these boys were on fire. Kent Karlstrom had himself three birdies on the front nine on his way to shooting a 79 and claiming victory. Antonio Barbosa was as steady eddie as they come shooting an 84 with just one double on the card! Nathan dai popped in a great birdie on number 6 and shot an 88, good enough to place him in third.

The summer is drawing to a close and colder weather is imminent it’s time to start thinking about what shots you are going to need during the winter months in order to beat the field. Future Champions Golf is committed to growing the game in and out of the golf course, strategy is a huge part of the game take time to understand and learn how to form a correct strategy for every golf course.