FCG Callaway World Championship is an event that has become one the elite testing grounds for junior golfers and this year was no exception. A tournament that provides juniors with an elite array of world championship golf courses including Dinah Shore the site of the ANA inspiration Championship held on the LPGA tour, a huge junior field with players flying from across the globe in order to compete with the best of the best and tough weather conditions, with an average temperature of 105 degrees golfers will be tested under extreme conditions. So, needless to say a win at this tournament has the potential to truly define a junior golfers career. Let’s look at the action that took place in the desert and see who came out on top. 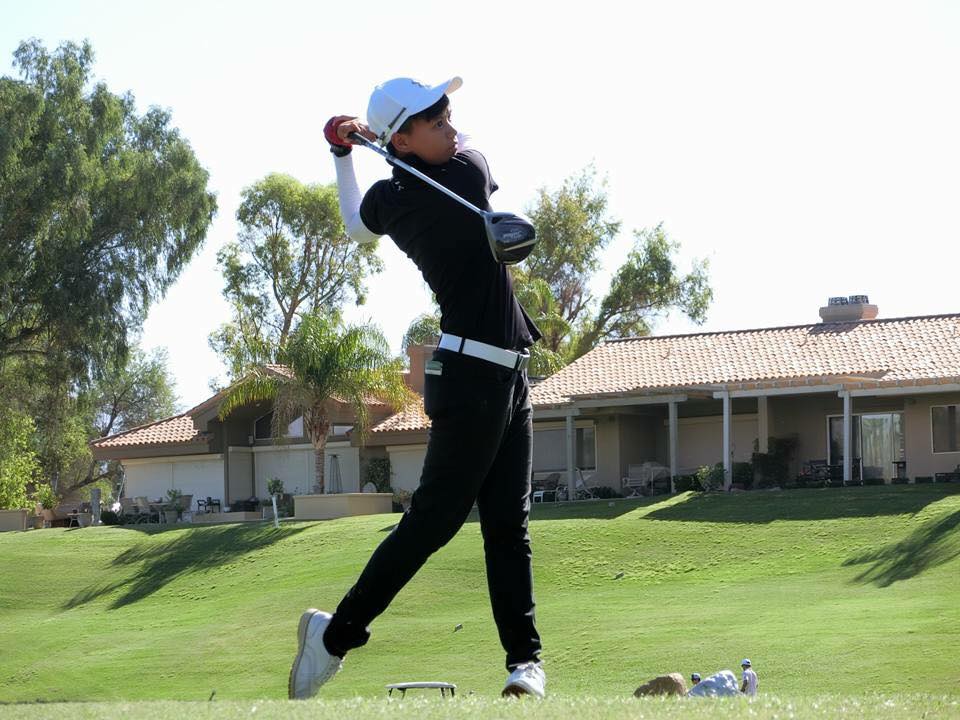 The boys 15-18 year old division had the task of playing The championship golf course at Mission Hills CC otherwise known as Dinah Shore. This venue is known for their tight fairways and fast undulating greens. These boys were given a daunting test but some of the elite golfers of the world were up to the challenge. Tommy Stephenson of the United States and Leon Philip D’Souza of the Philippines had a sunday that they will soon not forget, with Tommy stepping on the gas as soon as the gates opened despite starting off the round with a double bogey ended up with a 3-under 33 on the front nine. Leon Phillip was steady eddie throughout the first nine and had a great momentum changer on hole 11 when he birdied and Tommy carded a bogey 6 this put him just one shot off the lead. But, Tommy Stephenson held on strong and Leon Philip could not convert that final birdie, leaving Tommy Stephenson with the championship with a score 210, 6 under par while Leon Philip battled valiantly for second place with a score of 211, 5 under par! Jonathan Wijono of Indonesia had a great tournament shooting two rounds of 70 and shooting a final round 72 which was good enough to wrap up a strong solo 3rd place finish. Marcel Boet of New Zealand rounds up our under players for the week with a three day total of 214, 2-under par, Marcel takes home a great experience and a solo 4th place finish. Trevor Arashiro of the United States shot a first round 68 which was the low round of the entire tournament, unfortunately he could keep up the momentum and ended up with a solid 5th place finish and a three day total of 216 (E) par for the tournament. 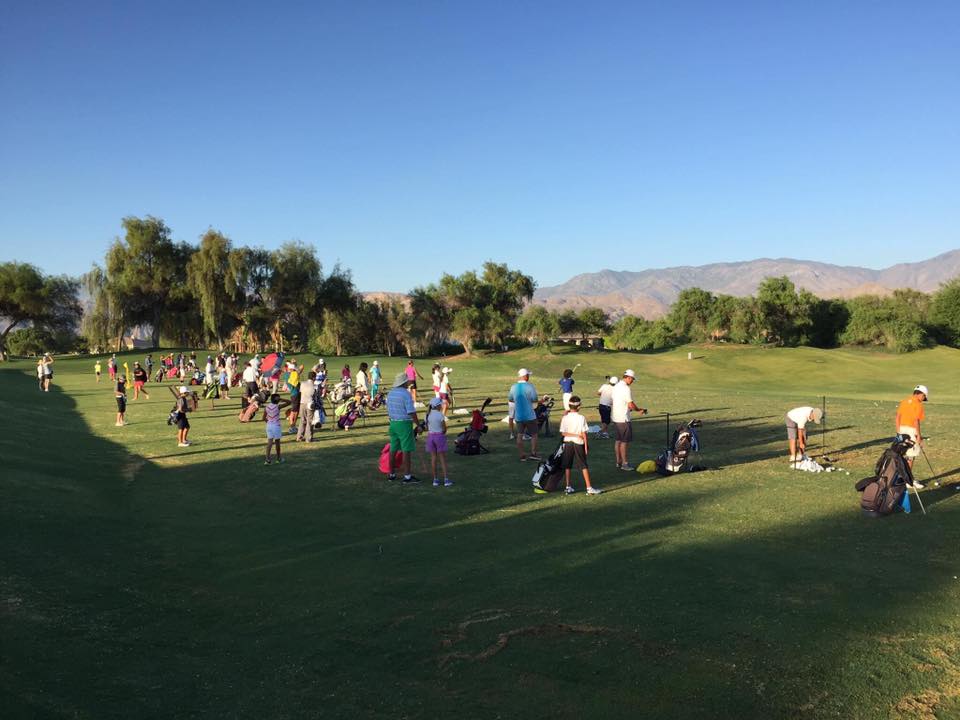 The girls 15-18 year old division had some firework of their own, playing at the Westin Mission HIlls Pete Dye golf course. Anybody who has ever played a Pete Dye course understands that it is not easy to dominate but these girls were up to the challenge and lucky for us we were there to watch some amazing golf. Sofia Chabon of the Phillippines played some consistent golf throughout the tournament with rounds of 71, 70 and 70, it took a dazzling final round 67 from Virginie Ding of Hong Kong to catch up to Sofia’s consistency. They both ended up at 211 (+1) for the tournament and a playoff was necessary to find a champion. Sophia Chabon outlasted her opponent and took home the honor of being called World Champion while Virginie Ding went home with a great second place finish. Keerattriya Foocharoen of Thailand was leading after the first round but could not keep up the momentum the next two days but she landed a solid solo third place finish at 213 (+3) for the tournament. Yuhsin Huang of Taiwan played brilliantly on the final day with a solid 69 to finish up her tournament she was able to take home a fourth place finish. Claire Hogle came storming back on the final day to shoot the low round of the tournament four-under 66, which catapulted her to a fifth place finish. 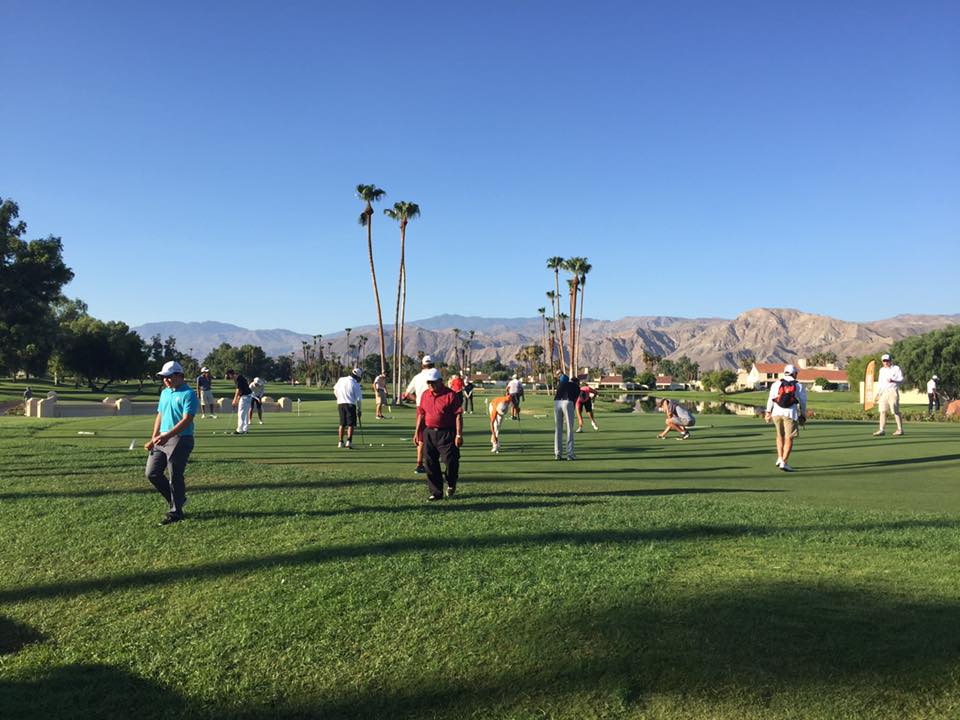 The boys 13-14 year old division were given the task to tackle the Pete Dye course as well, it was a challenging three days but in the end three players were able to shoot under par for the tournament and stand on that podium proud of the work they had done. Caden Fioroni of the United States had himself quite the tournament with three sub-seventy rounds of 69, 68, 68 and total of five under par for the week which was just enough to squeeze by and claim the World Championship title. Kentaro Nanayama of Indonesia was giving steady chase for the title as well in the end one shot marked the difference but Kentaro also shot three sub-seventy rounds 69,69 and 68 which allowed him to claim second place. Robin Williams of England must love our tournaments because this is the second time we mention his name in as many blogs, this time Robin took home third place with a 207 three day total (-3 ) for the championship. Zhang Yuze of China took home fourth place and was a beacon of consistency with a 211 (+1) total for the tournament. Ethan Dezzani of the United States shot the low round of the tournament on the first day with a 65 and used that momentum to place fifth for the week.

The girls 13-14 year old division played at Westin Mission Hills Pete Dye Course and played from the silver tees which came out to be a 5500 yard course for these players. Francesca Bernice Olivarez-Ilas from the Phillippines is having a summer to remember crowning herself the International Champion and now claming the World Champion title as well. A dominating performace from Francesa whose three sub-seventy rounds of 68, 69 and 68 allowed her to win the tournament by three strokes. In second place with a combined score of 208 (-2) for the tournament we have Jiaman Ni of China, she did all she could on the final day with an excellent round of 67 but it was not enough to catch up to Francesca. Camile Boyd of the United States shot the low round of the tournament on the first day of action with a 64 and rode that momentum to bring her home a third place finish. Xinyi Wang of Hong Kong used her solid play to turn in scores of 75, 72 and 72 in order to claim 4th place in her division. Ivanna Montemayor of Mexico got better and better as the tournament went on carding rounds of 78, 74 and 71 good enough to land her at fifth place for the tournament. Well done, girls!!!

The boys of the 11-12 year old division had the pleasure of playing the Westin Mission Hills Gary Player golf course, known for its wide fairways and narrow greens it’s a very good test of a player’s ability to place themselves on the correct side of the fairway for a better angle onto the green. Jayden Ford of New Zealand put on a dominating perfomance in this division shooting a three day total of 206 (-10) which was good enough to to win by seven strokes! Han En Wu of China shot an opening round 68, he kept the momentum going with a second round 71 and ended up with second place for the tournament. Bence Kotel of Hungary shot a final round 69 and used it to catapult himself into a solo third place finish. Patrick Hong of the United States shot three straight rounds of 72 in order to land him a solo fourth place finish. The big final day mover was Jacob Paule who shot a five under par 67 in order to sneak into a fifth place finish.

The girls 11-12 year old division played with the boys at the Gary Player golf course and from the get-go it seemed it was all about Nicole Felce of the United States. An opening day 68 followed up by a 69 and a 67 helped her dominate her age division and win by a staggering twelve shots! Chaewon Baek from the Republic of Korea played consistent golf all week and ended up shooting a three day total of 216 (E) and took home a great second place finish. Berlin Long of the United States finished up her tournament with a great final round 69 which helped her lock up a solo third place finish. Mimi Guo from New Zealand played some great golf all week and ended up with a 225 total (+9) which was good enough for solo fourth place. Brooke Ryback of the United States had a great tournament shooting three mid-seventy rounds which locked up fifth place.

The boys 9-10 year old division had the pleasure of playing at the Gary Player course as well, it provided an excellent challenge for these young golfers. Ryan Liang of Canada took home the honor of calling himself World Champion with a three day total 218 (+2) for the tournament good enough to win by nine strokes! Aditya Das of the United States used steady, consistent play in order to end up winning second with a three day total of 227 (+11). Jingcheng Wong of China had a great week as well and can return to his country proud of his third place finish. 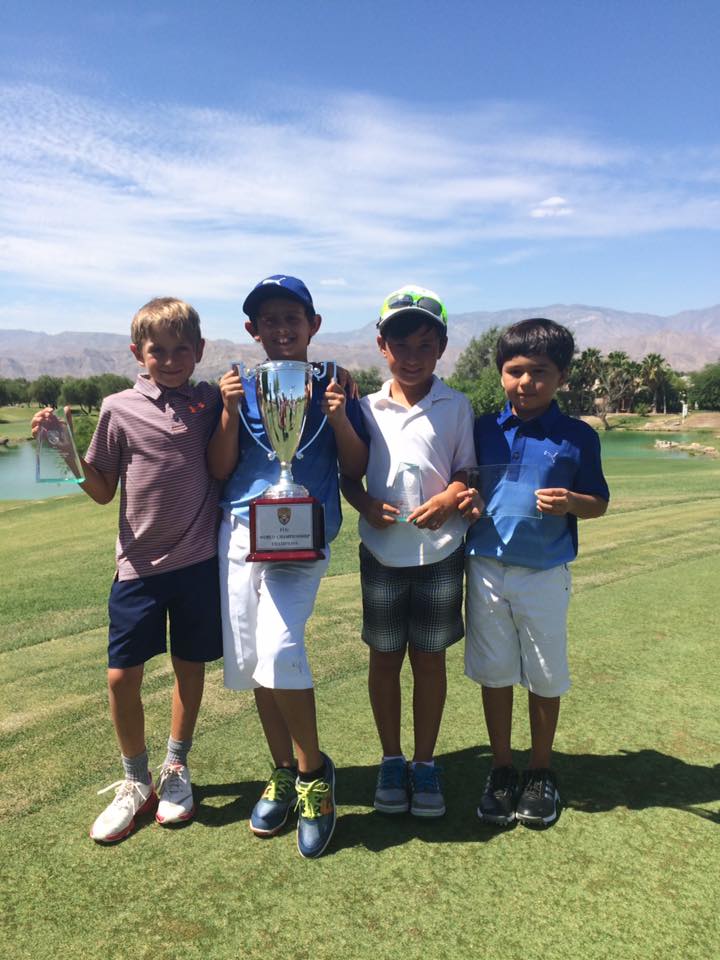 The girls 9-10 year old division played 9 holes every day over at the Gary Player golf course and the FCG staff was treated to some fantastic golf from these junior golfers. Darla May de la Torre of the United States shot three great under par rounds 35, 33 and 35 (-5 total) which were good enough to beat the field by three strokes!! Michelle Liu of Canada played some great golf as well ending up her tournament with a three day total of 106 (-2) and a solid second place finish. Wen Yue Hao of China played some consistent golf throughout the three days and ended up at even par for the tournament good enough for a solo third place finish. Way to go, girls!!

Rounding up our division are the always awesome 8 and under divisions, the boys played at the Gary Player Golf course and were excited to get things underway. Lucas Quintero Osejo of Colombia seemed to be in the right frame of mind all week, shooting two rounds under par and ending up (E) par for the tournament catapulting himself to the top of the podium, great job Lucas! Jake Valentine of England played great and consistent golf all week highlighted by a second day 34 and a solo second place finish. Quincy Costales of the United States displayed his best golf all week and ended up with a three day total of 115 (+7) for the tournament good enough for third place. 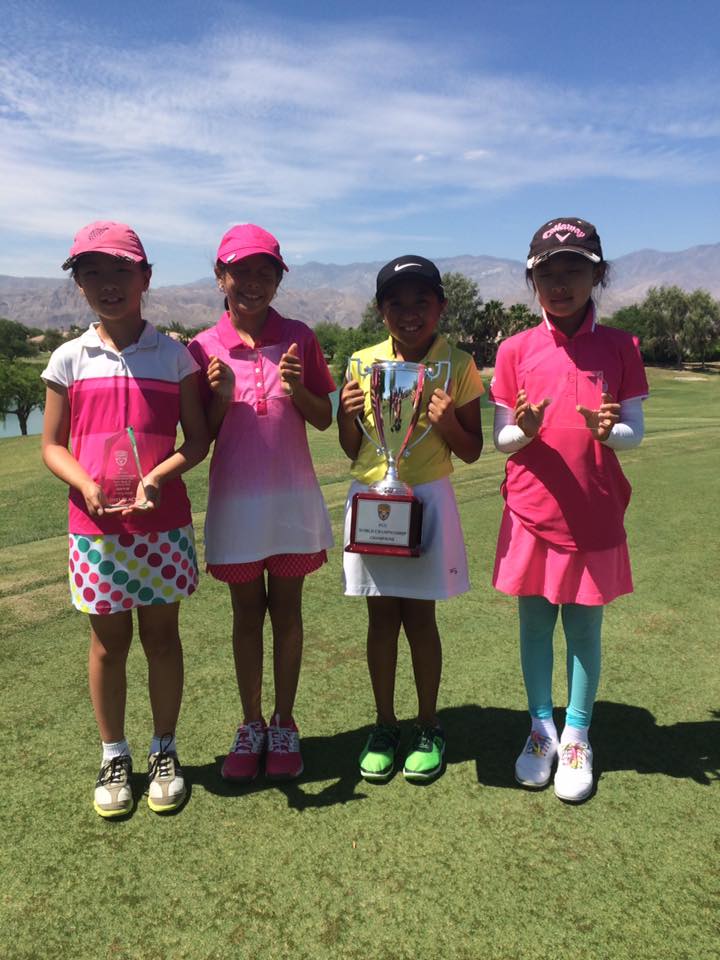 The 8 and under girls were not to be outdone by the boys, playing in the same golf course and played some amazing golf. Ava Cepeda of the United States took home the honor of calling herself World Champion after shooting a three day total 106 (-2) for the tournament. Ellie Marie Reisner of the United States had two great rounds of 35 in her week and used that to catapult herself into a solid second place finish. Zoe Salinas found herself on the podium once again shooting a great final round 37 to capture a great third place finish. 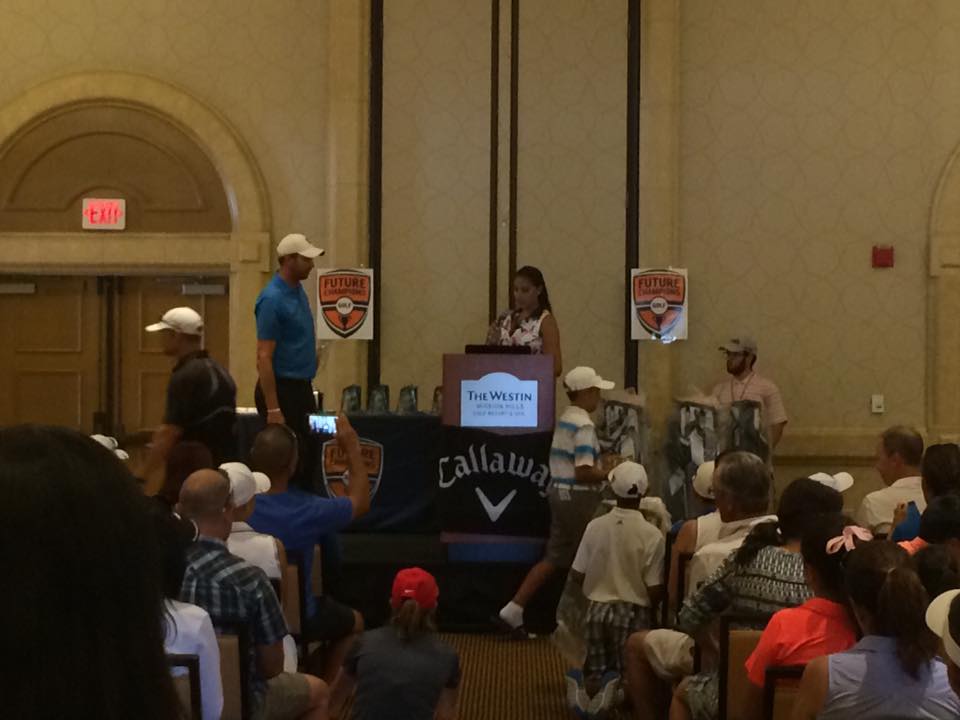 The FCG Callaway World Championship is a great stepping stone for any junior golfer throughout their career and it is our goal to keep providing junior golfer with tournaments such as these in order to display every player’s abilities in the grandest of stages. We would like to thank the staff at Mission Hills CC as well as the volunteers who without their help none of this would be possible. We hope the children and the parents alike had a lot of fun, we hope to see you next year ready to shoot these same awesome scores.