Future Champions Golf held the San Marcos Open over the weekend at beautiful St. Mark Golf club in San Marcos, CA. Players from far and wide convened at the beautiful 18 hole layout that had some fast greens and awesome weather over the weekend. The boys had two different age categories to choose from College and 13-14 year old category while the girls had two different age categories to choose from College prep and 12 and under. The college prep division had more than 25 in the field in both girls and boys which made for an awesome two day event and with perfect San Diego weather over the weekend scoring was amazing for our annual San Marcos Open. 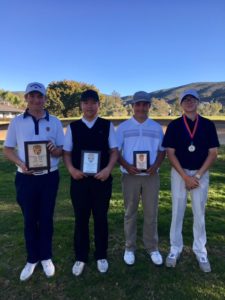 The boys college prep division had 34 players sign up for the event and with optimal scoring conditions players were eager to get out on the golf course and make a ton of birdies. Aiden Goldstein of Las Vegas and Tyler Schafer of Long Beach had identical scores at the end of two days and ended up tied for third place with two day total of 143 (+3) for the tournament. Woong Bin Song of Oceanside shot an opening round 73 to be three shots behind the first round leader and a scorching hot second round 68 helped him move up a couple spots and wind up in second place. Sean Breen of Temecula was just a marvel to watch over the weekend, hitting great tee shots and stellar iron shots which allowed him to obliterate the golf course and wind up in first place shooting a two day total of 139 (-1) for the tournament. 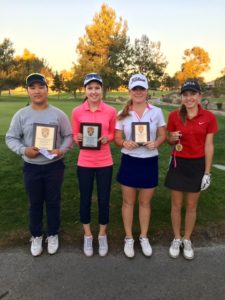 The girls college prep division had 26 girls from all over the world sign up for the two day event which made for a great tournament to watch. Lauren Gomez of San Diego and Vera Markevich of La Quinta decided to end up with the same two day total of 148 (+8) for the tournament. These girls played great over the weekend Lauren’s best score was a solid 72 on day 2 while Vera shot a solid 73 on the second day as well. Morgan Goldstein travelled all the way from Las Vegas to play in the San Marcos Open and she took full advantage of scoring conditions, firing off rounds of 72 and 70 in order to take home a solid third place finish. Nicole Whiston of San Diego was inspired over the weekend firing off six birdies and only five bogeys en route to a two day total of 139 (-1) for the event which was good enough for a nice second place finish. Mina Yoon of San Diego had one of those weekends that golfers dream about shooting two rounds in the 60’s and obliterating the field to win by five strokes with a two day total of 134 (-6) for the event. 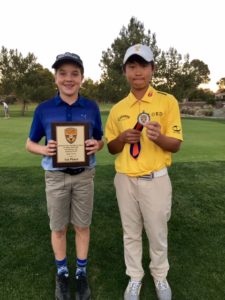 The boys 13-14 year old division had 4 boys sign up for the event which made for some amazing competition down the stretch on Sunday. Achuth Krishna of San Diego used a birdie on the difficult sixth to catapult himself into a solid third place finish. Dohoon Song of San Diego had himself quite the Sunday using a birdie on the difficult par 4 eighth en route to shooting a great 75 and ending up in second place. Tyler Kowack of San Diego was just a beacon of consistency shooting identical rounds of 75 and winding up with a two day total of 150 (+10) for the tournament and taking home a solid first place finish. 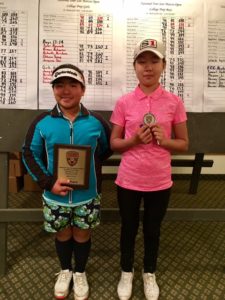 The girls 12 and under division had four girls sign up for the two day tournament. Sunshine and warm weather made this an event to remember especially for these girls who used perfect scoring conditions to play some great golf. Sofina Firouzi of Rancho Santa Fe had 10 pars over the weekend and wound up in a solid third place finish. Jung Won Choi travelled all the way from Las Vegas in order to play in this awesome San Marcos Open. She used this opportunity to play some great golf, an opening birdie in the second round helped her shoot a solid closing round 76 and take home a solid second place finish. Karen Tsuru of Carlsbad was a model of consistency throughout the weekend two birdies on the scorecard over the weekend allowed her to shoot two rounds in the seventies (76,75) and take home the coveted first place trophy.
Future Champions Golf takes pride in providing junior golfers with opportunities to play some great golf courses against some of the best junior golfers in the Western United States. We will continue to strive to make bigger and better events in order to provide junior golfers with great opportunities to showcase their talent. Our main goal is to empower youth through the game of golf with instruction programs, individual lessons and great junior golf tournaments. Please check out our Future Champions website that provides daily information on tournaments, instruction and golf updates.